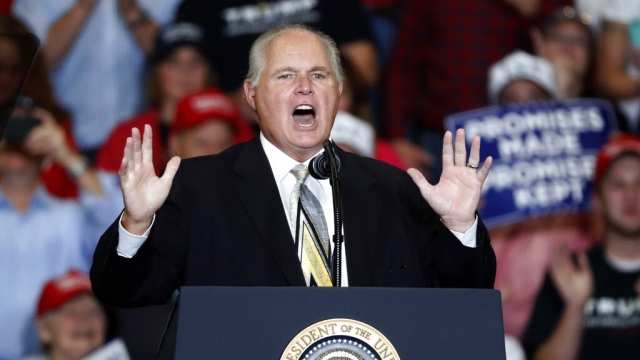 Influential radio host Rush Limbaugh died Wednesday after a battle with lung cancer. The 70-year-old was a pioneer for his brand of conservative talk radio and a polarizing force in American politics.

"We make the complex understandable, and we do it in a way that makes you love your country, not hate it," said Limbaugh.

The former local disc jockey made the switch to politics and hit syndication with "The Rush Limbaugh Show" in 1988, reeling in some 15 million weekly listeners and commanding the attention of Republican voters and elected leaders alike.

"In many ways, the Republican majority owes much of its continued success to the talk radio that Rush Limbaugh reinvented," said former Vice-president Mike Pence.

That included former President Trump, who awarded him the Presidential Medal of Freedom and spoke fondly of his friend Wednesday.

"Half the room went crazy and the other half, they knew he should get it. It was special and he was special," stated President Trump.

But controversial comments made over his decades-long career made him unpopular in some circles. He pushed racist ideologies like the Birther movement against former President Obama, and accused actor Michael J. Fox of exaggerating Parkinson's disease symptoms.

"He’s moving around and shaking and it’s purely an act," accused Limbaugh.

More recently, he helped fuel debunked theories about the 2020 election results. In December, he reflected on his career and family and thanked his listeners for their support.

"I understand now what Lou Gehrig meant, because I certainly feel like that: I feel extremely fortunate and lucky," stated Limbaugh.