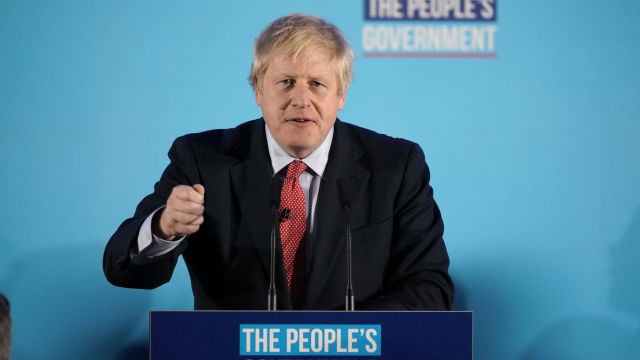 SMS
Boris Johnson's Conservative Party Wins Majority In U.K. Parliament
By Katherine Biek
By Katherine Biek
December 13, 2019
The prime minister is now all but certain to have parliamentary support he needs to make sure the U.K. exits the European Union in January.
SHOW TRANSCRIPT

U.K. Prime Minister Boris Johnson has declared victory after his Conservative Party won a majority of seats in Parliament.

Thursday marked the country's third general election in less than five years. With almost every constituency reporting Friday, the so-called Tories secured at least 364 of the 650 seats in the House of Commons. Its main opposition, the Labour Party, won just over 200 seats; the Scottish National Party won 48; and the Liberal Democrats now have 11.

It marks the Conservative Party's biggest electoral win since Margaret Thatcher captured her third term back in 1987.

This means Johnson is now all but certain to have the parliamentary support he needs to make sure the U.K. exits the European Union in January.

Meanwhile, after his party's defeat, Labour leader Jeremy Corbyn announced he plans to step down after a "process of reflection."

The new government is scheduled to convene Tuesday — two days before the Queen's Speech, which marks the start of the parliamentary year.