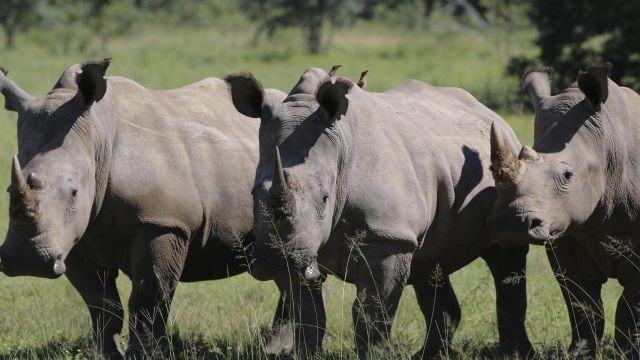 Countless animals around the world face extinction, many from loss of habitat and many others from poachers. In fact, wildlife poaching is a serious problem. And for those trying to protect endangered species, it's a dangerous job.

Anton Mzimba was the head of field ranger services for South Africa's Timbavati Private Nature Reserve near the famous Kruger National Park. He was well-respected and admired by field rangers, animal activists and government officials. Mzimba was a fierce protector of the nature reserve's wild animals, especially the endangered rhinoceros population, and he was considered incorruptible. Corruption is a big problem among field rangers in Africa.

"I'm defending the natural resources from those who want to loot it," he told the Global Conservation Corps in an interview last year. "I'm protecting lives of people, lives of animals. I'm protecting the plants. So, all the creatures, I am protecting. On the other hand, I am also a soldier because the duty of a soldier is to protect the country."

On July 26, Mzimba was gunned down in front of his home in the fight over wildlife poaching and trafficking. His wife was also wounded in the attack. No arrests have been made but the investigation into his murder continues.

"It's a really nasty business and a lot of this goes on with corruption, but very often it also goes on with coercion. So, rangers like this will have their families threatened. They are put under all kinds of stresses. It takes tremendous courage to get up every day and go out there to protect these animals knowing you may not come home again in the evening," Knights said.

Mzimba knew how crucial it is to protect endangered wildlife, especially rhinos, whose horns are sought after by organized criminal networks. The current rhino poaching crisis is fueled by demand for the animal's horn, mainly in China and Vietnam. The horn is still used in traditional Asian medicine and is seen as a symbol of wealth. In some parts of Asia, it's believed it can cure cancer and help a range of maladies. This is false. The horn is made of keratin, like hair and fingernails.

According to WildAid, 95% of the world's rhino population has been lost over the past 40 years. But Knights says educational campaigns are working. "Rhino horn prices have dropped dramatically from about $65,000 a kilo down to $12,000 to $18,000," he said.

But that's still enough incentive for criminal gangs to go after rhinos. The gangs also use sophisticated methods of hunting and tracking rhinos, including helicopters, night vision equipment and veterinary drugs to knock them out, according to World Wildlife Fund. There were just over 23,500 black and white rhinoceros left in the world as of 2017, with 75% in South Africa, the International Union for Conservation of Nature reported.