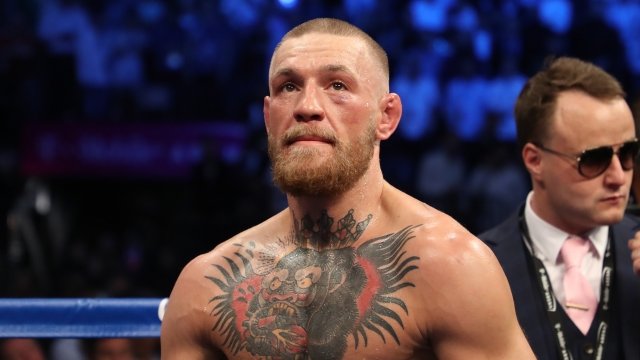 SMS
Conor McGregor Charged With Assault After Alleged Bus Attack
By Katherine Biek
By Katherine Biek
April 6, 2018
The mixed martial arts fighter is accused of vandalizing a vehicle full of athletes who were scheduled to compete at the Barclays Center.
SHOW TRANSCRIPT

The New York Police Department charged UFC star Conor McGregor with three counts of assault and one count of criminal mischief after he allegedly attacked a bus Thursday.

According to UFC, McGregor was part of a group of individuals that "vandalized" a vehicle full of athletes who were scheduled to compete at the Barclays Center this weekend.

Two athletes had to be pulled from the schedule because of injuries sustained in the incident.

UFC President Dana White called the incident "the most disgusting thing that has ever happened in the history of the company."

McGregor last fought for UFC in late 2016. He has not competed at all since losing a 2017 boxing match to Floyd Mayweather.