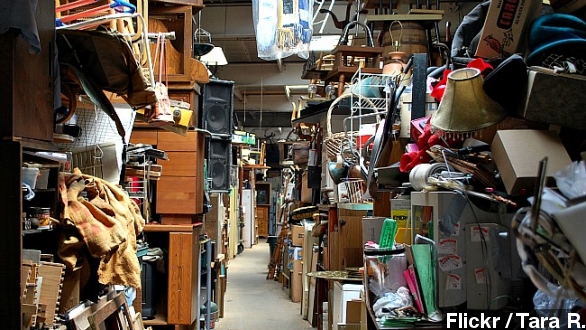 By Christine Slusser
June 16, 2014
A 66-year-old woman named Beverly Mitchell was apparently killed after the first floor of her home collapsed.
SHOW TRANSCRIPT

A 66-year-old woman was found dead in her basement after the floor collapsed on the first story of her home. One potential reason? Hoarding.

"The weight of the clutter on the first floor made it collapse to the basement. Concerned postal worker figured something was wrong, asked for a welfare check at that house. ... Police showed up, couldn't find the woman." (Via WTNH)

Reports say police first showed up Thursday and couldn't find anyone. On Friday, officers realized the floor had collapsed, and they cut a hole into the side of the house Saturday to start removing clutter.

"Officials say they found 66-year-old Beverly Mitchell on Saturday under all the rubble." (Via News 12 Connecticut)

WVIT reports crews had to use an excavator to move trash around. Neighbors described Mitchell as a recluse, noting she didn't often leave her cluttered home.

"'She saved newspapers, she saved every piece of paper,' [a neighbor] said. 'I think she just kind of packed herself right in there without realizing that this was what she was doing.'"

The problem of hoarding has of course been highlighted on TV shows like A&E's "Hoarders," following the mental and emotional struggles of hoarders. (Via A&E Television Networks / "Hoarders")

WebMD says hoarding is difficult to treat, and says, "Two percent to 5% of Americans may meet the criteria for being hoarders."

Police also told WVIT Mitchell's home now "is considered a hazmat situation." An autopsy will be performed to determine the cause of death, and police do not suspect foul play.