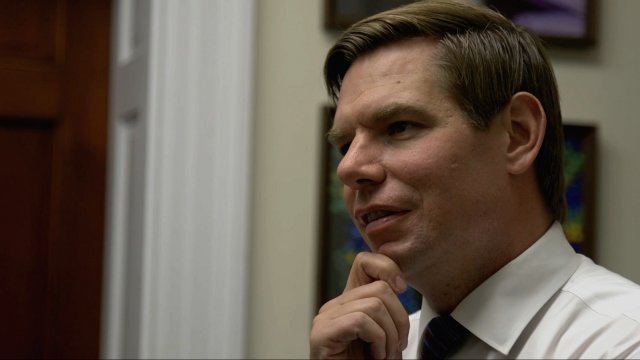 SMS
This Democrat Wants To Take Politics Out Of The Trump-Russia Probes
By Eugene Daniels
By Eugene Daniels
June 27, 2017
"Russia will come at us again, and it may not be Democrats are the victims next time," warns Rep. Eric Swalwell.
SHOW TRANSCRIPT

California Congressman Eric Swalwell is a Democratic up-and-comer; he's a former prosecutor and a member of the House intel committee, which is currently investigating Russia's meddling in the 2016 election.

"This is like Russia getting in at Google at a dollar a share and having such a tremendous return on their investment," Swalwell said. "They have really succeeded in what they did."

He asked: "Why do you think that President Trump will not state that Russia meddled in our elections?"

There are currently five investigations into Russia being conducted: two in the House, two in the Senate and one by a special counsel. The coverage of those probes has largely been about the drama and politics and any backlash.

"The Russians attacked our democracy the last election," he said. "They did it through a multi faceted campaign of hacking Dem emails, disseminating those emails through fake news and social media trolls. But also by going into state voter base information systems. We don’t know yet how deep they went."

The politics of the topic and early controversy around the intel committee chairman's coziness with the White House, which led to his recusal, have made some question the probe and wonder why there's been no hard evidence yet.

"We’re not wasting our time," Swalwell said. "Evidence is not a conclusion, evidence is an assembly of facts — witness accounts, documents that you review, that you test, that you bend to see what conclusion it takes you to. It’s too early to tell whether there was collusion. There is enough for us to keep asking questions."

In hearing after hearing, government officials have been clear 2016 isn't a one-off — that the tactics used last year can and will be used against the U.S. again. And Swalwell says future meddling is likely to be bipartisan.

"Russia will come at us again and it may not be Democrats are the victims next time. And it’s not only Russia that has capabilities like this. But we can do something; we can strengthen our election systems, give federal resources to the states and counties."

But there's one huge problem. Until recently, the president wouldn't really acknowledge that Russia was behind the attacks, despite unanimous agreement in the intelligence community.

"There’s only one steering wheel in the car," Swalwell said. "So even if Dan Coats and the FBI leadership and the national security adviser are all shouting at the driver: 'Beware! Russia ahead. Don’t go in that direction, it’s not friendly,' the president still controls the steering and the direction. If he doesn’t acknowledge it and they do, that doesn’t help us as a country."