'A Better Deal' Is No Deal For Some Democrats 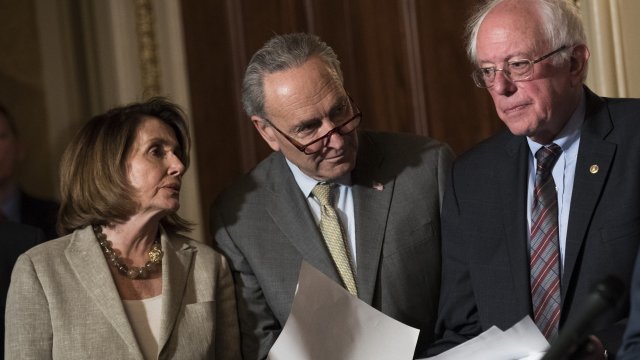 SMS
'A Better Deal' Is No Deal For Some Democrats

By Eugene Daniels
August 1, 2017
Finding a national rallying cry for Democrats might be harder than they thought.
SHOW TRANSCRIPT

Lately, most eyes have been on the GOP's inability to gain ideological consensus on repealing and replacing Obamacare. But across the aisle, Democrats aren't as united as they'd probably like you to think.

Recently, Democratic congressional leadership went to Virginia and unveiled a brand-new slogan and agenda that puts an economic message first and foremost. It's their way to try to find a cohesive national message to take back Congress in 2018 — other than, "Hey, we're better than President Trump!" There's just one huge problem: Not everyone seems to be on board.

Politico spoke with aides, lawmakers and advocates who aren't sure one huge national slogan and plan is going to work out. Missouri Sen. Claire McCaskill put it this way: "Frankly, I'm not focused on national Democratic slogans as much as I am on what's going on at people's kitchen tables at home."

Many Democratic leaders are banking on an economic message being a home run. They're hoping it has more universal appeal than talking about unpopular social issues or the Russia investigations: Pretty much every citizen wants more money and more jobs, after all.

But other groups, like the Democratic National Committee, are working on their own rebranding of the party while looking to see what happened during the 2016 election, so getting everyone on the same page is looking less and less likely. 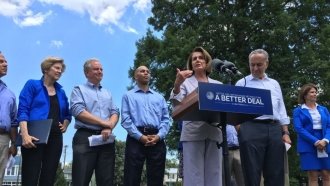 Democrats Focus On Jobs And The Economy With 'A Better Deal'

This kind of disarray isn't completely out of the ordinary for parties. After a big national loss, they tend to start looking for the reasons why. But national messages are tough. There is rarely a one-size fits all, and that seems especially true for Democrats and our current political environment.

Democrats are basically working to try to capture three groups of voters nationwide. First, they want the white working-class voters that went so hard to President Trump, especially those that voted for President Obama in 2012 before jumping ship. They also want the galvanized progressives who are excited and taking to the streets all over the country. And this is all while keeping the base happy.