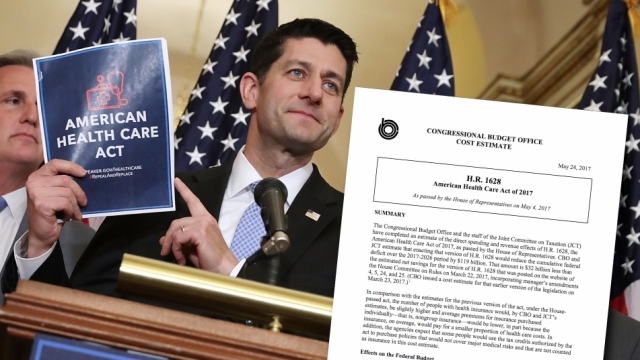 SMS
CBO: Republican Health Care Bill Cuts Less Than Previous Versions
By Jake Jones
By Jake Jones
May 24, 2017
The latest GOP health care bill — which passed the House in early May — would cut less from the federal deficit than its previous two versions.
SHOW TRANSCRIPT

The latest version of the GOP's American Health Care Act has been reviewed by the Congressional Budget Office.

By now, the CBO has scored three different versions of this bill. The organization projects that this latest version would cut the federal deficit the least — $119 billion by 2026. It also projects that compared to current law, this latest plan would leave 23 million fewer people with health insurance by 2026.

The CBO is a nonpartisan agency that analyses how proposed bills could impact the federal budget and the economy.

The CBO previously projected the AHCA would leave 24 million fewer Americans with health insurance by 2026 compared to the current law. Republicans tweaked the bill to help it pass the House, but the CBO's score on the changes said the bill would cost more but wouldn't insure more people.

Republicans tried to downplay the CBO's score the first time around ...

"The one thing I'm certain will happen is that CBO will say, 'Well, gosh, not as many people will get coverage,'" House Speaker Paul Ryan said on "Face the Nation." "You know why? Because this isn't a government mandate."

"If the CBO was right about Obamacare to begin with, there'd be 8 million more people on Obamacare today than there actually are," Mick Mulvaney, director of the White House Office of Management and Budget, said on ABC's "This Week." Politifact rated that statement as "half true."

"We will get a score next week. CBO will do what they need to do," Gary Cohn, director of the White House National Economic Council, said on Fox News. "In the past, the CBO's score has really been meaningless. They've said that many more people would be insured than are actually insured."

... but that version of the health care bill didn't make it to a vote. The GOP amended the bill to court hard-line conservatives. It passed the House 217-213 in early May. The bill will head to the Senate where it needs 51 votes to pass.