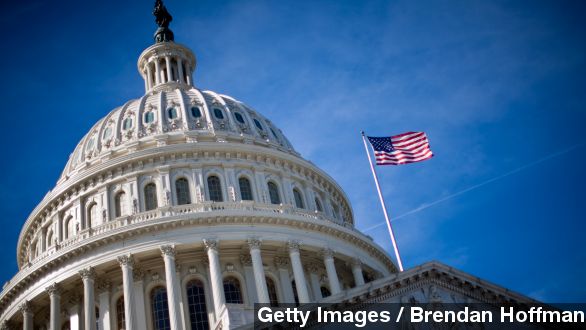 SMS
Congress Unveils $1.1 Trillion Plan To Avoid Gov. Shutdown
By Jay Strubberg
By Jay Strubberg
December 9, 2014
Tuesday's $1.1 trillion bill is Congress's best hope to avoid another government shutdown, but it will take some luck to get through in time.
SHOW TRANSCRIPT

Congressional leaders have tried to assure us there won't be another government shutdown, and Tuesday the House unveiled a $1.1 trillion spending bill it hopes to pass before the Thursday deadline.

According to The Washington Post, the Republican-crafted legislation includes funding for military support against ISIS and to help battle the Ebola epidemic in West Africa. It also reportedly makes "modest cuts" to the EPA, IRS and provides no extra money for the Affordable Care Act.

Senate Majority Leader Harry Reid said, "American people certainly ... shouldn't be facing another government shutdown. ... No one wins from these cliffhanger fights that we're having. People that lose are the American people." (Video via Fox News)

Assuming the bill gets the green light from the House, it then moves to the Senate, but that doesn't leave lawmakers much time to make a decision.

So little time in fact, that they may have to bend a few rules if they decide to push the bill through. And as NPR's Alisa Chang points out: (Video via WTTG)

NPR's Ailsa Chang said, "It requires getting all the Senate Republicans to agree to bypass some procedural rules and fast-track it. And the Senate is a funny, traditional place: it only takes one senator to object to all of that."

Lawmakers on both sides of the aisle obviously want to avoid the public backlash they received after the government shutdown last year.

President Obama said, "This Republican shutdown did not have to happen." (Video via The White House)

A public opinion poll from The Washington Post last year shows Congress's approval took a hit, with Republicans taking the brunt of it.

The proposed House bill would continue funding government agencies through September 2015, not including the Department of Homeland Security, which would reportedly stop receiving money in February, when we can all expect a new budget battle over immigration.