Congress To Take Up 'Ban The Box' Bill 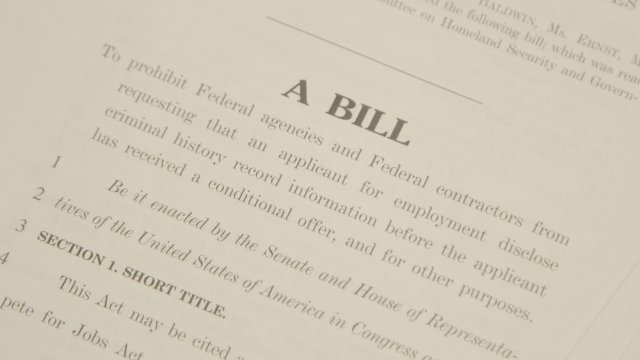 "Ban the Box" bills have successfully outlawed criminal record checks on job applications at the state and local level across the country. Now, the U.S. House is expected to take up its version of that idea, the Fair Chance Act, for a full vote in the coming weeks.

The bill would prohibit federal agencies and government contractors from asking about criminal history before a conditional offer of employment is made. Should an employer see a criminal history they don't like at that time, they can rescind the offer. They just can't ask before.

The Obama administration issued similar regulations back in 2016, but those didn't apply to contractors. Members on both sides of the aisle are looking to make these ideas permanent. A companion piece of legislation passed out of a Senate committee in early March, just about a month after being introduced by Sens. Cory Booker and Ron Johnson.

Johnson has spearheaded the legislation for three Congresses, each time unsuccessfully. He says momentum after the First Step Act was passed makes him believe the third time will be the charm.

For the most part, members on both sides of the aisle sung the bill's praises during the committee hearing. Still, Republican ranking member Jim Jordan wants to know more before supporting the bill. He's asking the Government Accountability Office to study the policy before a vote happens. Others who don't support it say it's a waste of time and resources for both the employer and prospective employee if the employer won't hire someone with a criminal history. They say they should be allowed to be up-front about those qualifications.

Johnson says that while the bipartisan, bicameral bill would only impact a small group, he wants other employers to take note.

"I'm hoping that with the federal government and its contractors being required to adopt this policy, other employers will start to realize it's well worth giving people who want to turn their lives around a second chance," he said.

A date for the vote has not been set.