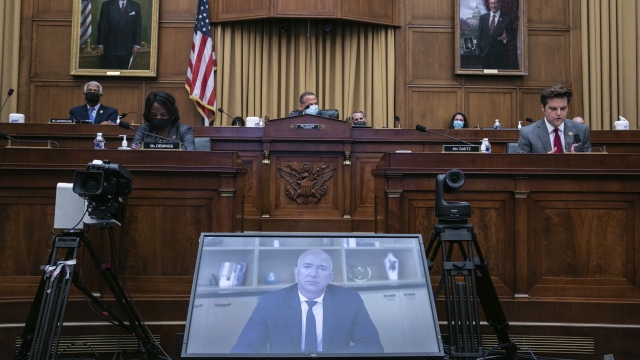 SMS
Congress, Tech CEOs Spar Over Surveillance, Bias In Antitrust Hearing
By Tyler Adkisson
By Tyler Adkisson
July 29, 2020
The antitrust hearings saw two distinct lines of questioning: one about competition concerns, and another about the political biases of Big Tech.
SHOW TRANSCRIPT

The CEOs of Facebook, Google, Apple and Amazon faced aggressive questions in Wednesday’s blockbuster antitrust hearing, often shifting from accusations of anti-conservative bias from the right...

Rep. Jim Jordan: “I’ll just cut to the chase: Big Tech’s out to get conservatives.”

To Democrats asking about how all four of these distinctly different companies fall under the same antitrust umbrella without operating in the same marketplaces.

Rep. David Cicilline: “Each platform uses its control over digital infrastructure to surveil other companies, their growth, business activity, and whether they might pose a competitive threat.”

One way lawmakers attempted to do this was by showing how these companies often buy potential rivals rather than compete with them. An example: Facebook buying Instagram.

Rep. Jerry Nadler: "What did you mean when you answered that the purpose of the deal was to neutralize a potential competitor?"

Facebook CEO Mark Zuckerberg: “I’ve been clear that Instagram was a competitor in the space of mobile photo sharing. [...] I think the FTC had all of these documents and reviewed this and unanimously voted."

While some Republicans continued to emphasize perceived anti-conservative bias, often interrupting the proceedings.

Jordan: "Mr. Chairman, we have the email. There is no fringe conspiracy theory.”

Rep. Cicilline: “Excuse me, you had your time. You do not have the time. Please be respectful, she controls the time.”

"Being big is not inherently bad,” said Sensenbrenner.

And Rep. Greg Steube told Newsy that he didn’t see an issue with these companies' structures.

“I don’t agree with the Democrats' view of those antitrust issues. I don’t agree in breaking up private companies. [...] If these companies are somehow abridging the rights of people they don’t necessarily agree with because of their political beliefs, and skewing that, I have a real problem with that.”

The virtual hearing made it easy for some to avoid substantive antitrust questions. It took nearly two hours for Amazon CEO Jeff Bezos to field a question.