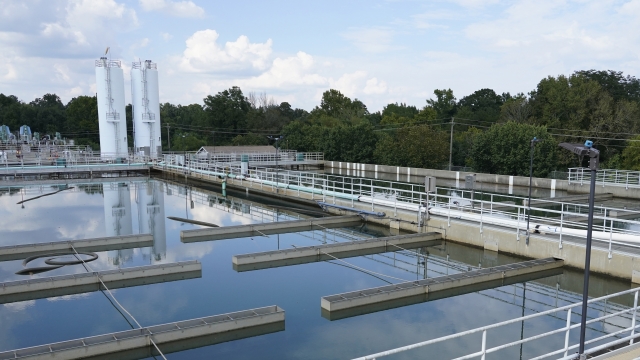 Congress is investigating the crisis that left 150,000 people in Mississippi's capital city without running water for several days in late summer, according to a letter sent to Gov. Tate Reeves by two Democratic officials.

Reps. Bennie Thompson, of Mississippi, and Carolyn Maloney, of New York, sent the letter Monday requesting information on how Mississippi plans to spend $10 billion from the American Rescue Plan Act and from the Bipartisan Infrastructure Law, and $429 million "specifically allotted to enhance the state's water infrastructure."

The letter indicates "the start of a joint investigation" by the House Homeland Security and the Oversight and Reform committees into a crisis that deprived Jackson's 150,000 residents of running water for several days in late August and early September, Adam Comis, a staffer for the committee, told The Associated Press.

Thompson's district includes most of Jackson, and he chairs the Homeland Security Committee. Maloney chairs the Oversight and Reform Committee.

Jackson has had water problems for years, and the latest troubles began in late August after heavy rainfall exacerbated problems in the city's main treatment plant, leaving many customers without running water. Jackson had already been under a boil-water notice since late July because the state health department found cloudy water that could make people ill.

Running water was restored within days, and a boil-water notice was lifted in mid-September, but the letter to Reeves says "water plant infrastructure in the city remains precarious, and risks to Jackson's residents persist."

Students Return To Campus Amid Water Crisis In Jackson, Mississippi

Jackson remained under a boil water advisory, but the drop in water pressure that had brought the system to near collapse appeared to be resolved.

The pair of congressional Democrats requested a breakdown of where the state sent funds from the American Rescue Plan Act and the Bipartisan Infrastructure Law, including "the racial demographics and population sizes of each" community that received aid. They also requested information on whether Jackson has faced "burdensome hurdles" to receive additional federal funds. The letter asked Reeves to provide the requested information by Oct. 31.

Mississippi has not yet announced how it will spend American Rescue Plan Act money for water projects. Cities and counties had a Sept. 30 deadline to apply for funding.

According to the letter, which was first reported on by NBC News, Oversight Committee staff learned in a briefing with Jackson officials that the state attempted to limit funding to Jackson for its water system. The state allegedly planned to "bar communities of more than 4,000 people from competing for additional funding from the Bipartisan Infrastructure Law," the letter says.

In their letter, Thompson and Maloney also referenced reporting by the AP that Reeves had a hand in delaying funds for water system repairs in Jackson and claimed to have blocked funds. Reeves' office did not immediately respond to AP's request for comment on the letter.

The Environmental Protection Agency issued a notice in January that Jackson's water system violates the federal Safe Drinking Water Act. In September, federal attorneys threatened legal action against the city if it did not agree to negotiations related to its water system. Jackson Mayor Chokwe Antar Lumumba said the city was working with the federal government on a plan to fix the water system.

Failure by city and state officials to provide Jackson residents with a reliable water system reflects decades of government dysfunction, population change and decaying infrastructure. It has also fueled a political battle between GOP state lawmakers and Democratic city officials.

That acrimony continued after the Mississippi Emergency Management Agency announced Friday that it is seeking a private contractor to run the Jackson water system for one year. The agreement would be funded by the city of Jackson, according to the proposal released by MEMA.

The president approved an emergency declaration, directing his administration to surge federal assistance to the area.

In a news release Monday, Reeves said his office was told by city officials that Lumumba is planning to "functionally end the city's cooperation" by "refusing to participate in the process of selecting a water operator."

"Although politics is clearly his priority, we are simply trying to ensure that Jackson water does not fail again," Reeves said. "Ultimately, it may fall to the city council to rein in this radical gambit."

The rancor ensued even though MEMA wrote that it requested a private contractor "in unified command with the City of Jackson."

Reeves threatened to pull state assistance if the city didn't change course. City officials were communicating they "no longer desire state assistance and insist on going it alone," Reeves said.

In a statement, Lumumba retorted that the city had been "'going it alone' after years of asking for state support" and that Jackson "has made no mention of ending the City's cooperation" with state and federal officials. The mayor said the city would not agree to the request for a private contractor until it had an opportunity to revise the language in the proposal.

"The City, with support from those who truly are invested in the repair and maintenance of the water treatment facilities, will have the final say," Lumumba said. "We look forward to productive conversations that lead to an actual agreement instead of a headline."