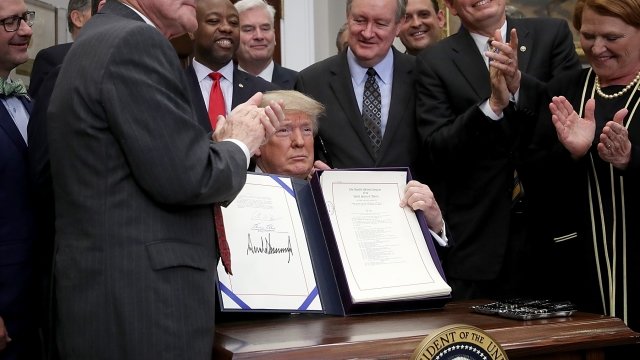 President Donald Trump has signed a bill to weaken some banking regulations put in place after the 2008 financial crisis.

The bill passed through Congress with some bipartisan support. It was largely backed by House conservatives, though 33 Democrats also supported it. Only one Republican voted against it. It passed the Senate in March.

The bill loosens some requirements on all but the country's largest banks. Those requirements were put in place by the Dodd-Frank Act. The bill raises the threshold of a bank being "too big to fail" from $50 billion to $250 billion in assets. Smaller banks won't have to keep as much money on hand and won't have to have a plan in case they fail. And the bill makes even more changes for banks with less than $10 billion in assets.

But some Democrats criticized the bill as unnecessary, pointing to high profits at banks. Most Republicans have wanted this bill for a while, though. They say it will help smaller banks offer more loans and further stimulate the economy.