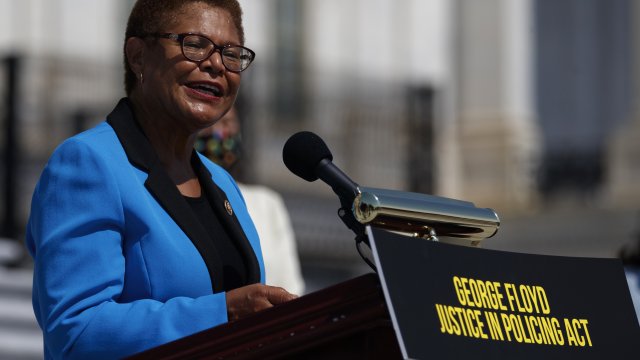 By Alexandra Miller
May 20, 2021
President Biden and Speaker Pelosi had set the deadline for May 25th.
SHOW TRANSCRIPT

President Biden and House Speaker Nancy Pelosi set a deadline for Congress to pass police reform. Newsy has learned the deadline, May 25th, is almost certainly not going to be met.

Sources tell Newsy those involved in the discussions on Capitol Hill, filled with Democrats and Republicans from both the House and Senate, aren’t even focused on the deadline. Those sources say negotiators are more focused on getting comprehensive legislation across the finish line.

The House passed the George Floyd Justice in Policing Act for the second time in March. Notably the legislation includes banning chokeholds, no knock warrants and special civil protections for police officers, known as qualified immunity. It also creates a misconduct database to prohibit officers from leapfrogging from place to place after being fired. The biggest point of contention right now: qualified immunity. Democrats want it and it's a red line for Republicans.

Former Congressional Black Caucus Chairwoman Karen Bass will continue to work with Senators Cory Booker and Tim Scott while the House is on recess next week. They led the charge in 2020, but ultimately failed. The sticking point then? Qualified immunity. This time around, leaders insist they’re more optimistic.