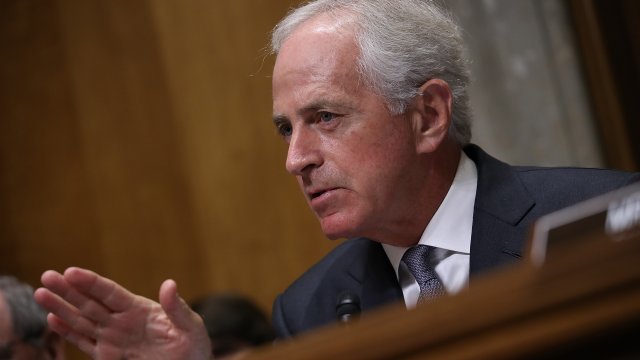 SMS
Congress Questions Presidential Power Over Nukes
By Matt Picht
By Matt Picht
November 14, 2017
The hearing was partly about President Trump, but also about the changing nature of nuclear threats.
SHOW TRANSCRIPT

For the first time in decades, Congress held a hearing on the president's unilateral authority to use a nuclear weapon.

The hearing came after months of nuclear-laced tension between President Trump and North Korea — something Democrats made sure to bring up.

Sen. Ed Markey said during the hearing, "Many Americans share my fear that the president's bombastic words could turn into nuclear reality."

But the committee also addressed the changing nature of nuclear threats. Nuclear engagement rules were originally formed to rapidly respond to an overwhelming attack from the Soviet Union.

Modern nuclear threats, like North Korea, tend to be more volatile but with less destructive capabilities.

The witnesses before the committee noted that the president was still constrained by the law from using nuclear weapons, unless there was an imminent threat. They also warned Congress against new restrictions.

Duke University professor Peter Feaver told the committee, "You want to make sure you don't propose a legislative fix that undermines the nuclear deterrent and thus compromises the effectiveness of why we have nuclear weapons."

Some Democrats have introduced legislation to explicitly prevent the president from launching a nuclear first strike without a declaration of war from Congress.