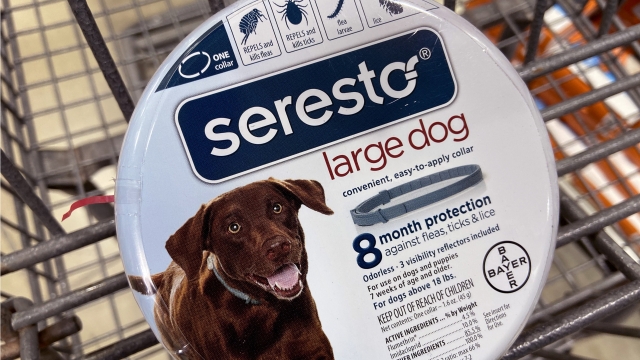 It's something thousands of grieving pet owners across the country have been waiting to hear — an effort from the government to pull Seresto flea and tick collars off the market.

"The steps we are asking for today are crucial because it's important to protect our pets and our families too," Rep. Raja Krishnamoorthi said.

The collars in question were at the center of a House Congressional hearing Wednesday.

"I'm convinced it was the Seresto collar that killed Tigger," said Faye Hemsley, whose pet died. "And if he did not have the collar, he would still be alive today."

An investigation, stemming from a USA Today report, found there'd been 75,000 incidents linked to the Seresto collar and 1,700 pet deaths.

Since then, the members of Congress say those numbers have increased to more than 98,000 incident reports, and 2,500 pet deaths.

The idea behind these collars is simple: Place it around your dog or cat's neck and two active ingredients stored inside are released onto the skin. The collar is supposed to protect against fleas and ticks for up to eight months.

But instead, thousands of pet owners say they've done more harm than good. Some have filed incident reports with the Federal Trade Commission, claiming the Seresto collars were linked to their pet's death. Some complaints allege that "fake" flea collars were shipped from China from fraudulent but convincing websites.

It's important to note that incident reports don't necessarily mean the collar caused the problem.

But testimonials obtained by Gizmodo through a Freedom of Information Act request tell a heartbreakingly different story.

One complainant wrote: "I believe, without a shadow of a doubt in my mind, that this product is dangerous and that it killed… my daughter's dog … This product needs to go."

Another filed a report about her dog. "She had an allergic reaction to the collar, her neck was busted open and bleeding … I really thought I had lost her."

And another on the counterfeits: "I don't want anyone else to get tricked into this scam and buy these fake collars."

The Seresto flea and tick collar got the green light from the EPA in 2012 and hit store shelves the next year.

Since then, Bayer — the original company behind the collar — and Elanco, which purchased the product in 2020, have sold nearly 34 million collars.

Lawmakers determined in their report that both the EPA and Elanco were well aware of the dangers surrounding the Seresto collars. But one of the big questions raised during Wednesday's hearing: Why didn't they do anything about it?

"No product is without risk," Elanco Animal Health President and CEO Jeff Simmons said. "What matters is if those risks are reasonable, in light of the benefits."