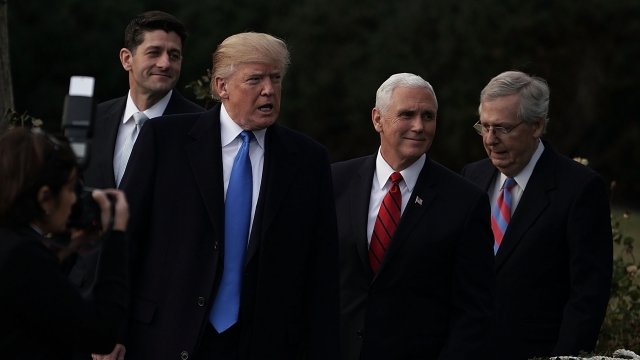 During an election year, the GOP has a possibly controversial list of legislative agenda items.

A new year means a new pile of priority agenda items for Congress. As everyone heads back to Washington, D.C., legislators will have to make some immediate fixes — like making sure the government doesn't run out of money by Jan. 19.

But what else is the GOP planning to work on this year? The party's agenda has four very hefty and potentially controversial items: infrastructure, health care, welfare reform and immigration.

Infrastructure is something that could be a bipartisan effort.

"A bridge is not a Democratic or Republican thing," Politico's Daniel Lippman said. "Everyone wants to get to work without sitting in miles of traffic, and Trump sees himself as a builder."

The biggest issue will be how to pay for what could be a $1 trillion package. President Donald Trump has promised to do something about crumbling roads and bridges since his 2016 campaign, but getting conservative Republicans on board to spend that much could be a big lift.

It might be an even bigger task to round up support for another stab at repealing and replacing Obamacare. The Republican tax bill made some progress by axing Obamacare's individual mandate — but only in exchange for the prospect of a bipartisan bill to stabilize the law.

"They promised [that] to Susan Collins, senator from Maine, which is basically propping up health care exchange markets and adding some subsidies," Lippmann said.

And it's (mostly) about logistics.

House Speaker Paul Ryan has his eyes set on reforming welfare and entitlements and has for years. Trump and Majority Leader Mitch McConnell aren't completely on board — at least not with the big ones like Medicare and Social Security. The president is reportedly interested in tighter work requirements and even possible drug testing for food stamp recipients.

When it comes to immigration, it's a full docket. New vetting regulations and a merit-based immigration system are on the agenda, and time is running out to replace DACA protections for young immigrants. But the White House wants to tie that fix to funding Trump's much-promised wall along the southern U.S. border.

"To Democrats, that's a non-starter," Lippmann said. "They don't want to trade kids — protecting these Dreamers, these 800,000 teenagers and young adults from deportation, if they have to have a huge wall. The compromise would be spending billions of extra dollars funded by the government for budget security in exchange."

It'd be tough to tackle any of these issues in isolation, so together they are a bit daunting, to say the least. And thanks to Alabama's newest senator, Doug Jones, Republicans have only a razor-thin lead in the Senate to work with. But McConnell has talked about getting back to bipartisan deals in Congress, something that hasn't happened for some time now.