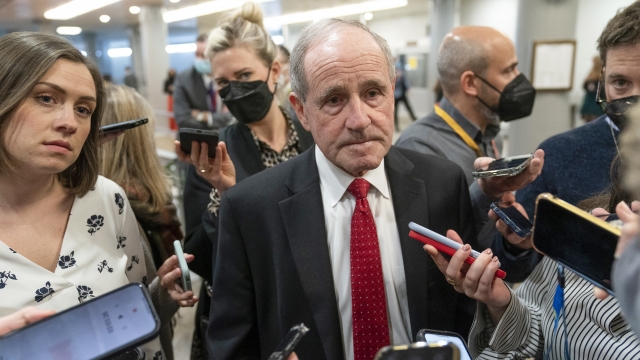 SMS
Congress Divided Over Timing Of Russia Sanctions
By Nathaniel Reed
By Nathaniel Reed
February 15, 2022
Some Republicans in Congress want to punish Russia immediately, but others say that would rob the U.S. of its best bargaining chip.

There was partisan fallout Tuesday after Democrats and Republicans failed to reach an agreement on Russian sanctions.

Over 30 Senate Republicans this afternoon released their own bill that would stop construction of the Nord Stream 2 Pipeline, place sanctions on major Russian banks and provide military assistance to Ukraine.

"It's a shame that Senate Republicans have decided to choose partisan posturing instead of working to reach consensus on a comprehensive bipartisan proposal that would demonstrate a united front to deter Putin from re-invading Ukraine."

The disagreement is over the timing of sanctions. Some Republicans in Congress want to punish Russia immediately, but others say that would rob the us of its best bargaining chip.

"I urge President Putin to choose the right path, deescalate tensions," said Democratic Sen. Mark Warner, Senate Intelligence Committee Chairman. "Don't just talk about de-escalations but actually deescalate. Engage in a real and honest diplomatic process and end any plans leading towards a violent confrontation in Ukraine. By doing this, he would ultimately spare Russia the crippling economic consequences that would be necessitated by his aggression."

Tuesday night, a bipartisan group of 12 senators including Republican leader Mitch McConnell and Senate Majority Leader Chuck Schumer released their own statement, expressing solidarity with the people of Ukraine and vowing sanctions if Russia invades.

But statements are not nearly as powerful as acts of Congress, and Congress is poised to leave this week without voting on any form of sanctions on Russia.