Congress Didn't Use Its Inside Voice During Hearing On Flint, Mich. 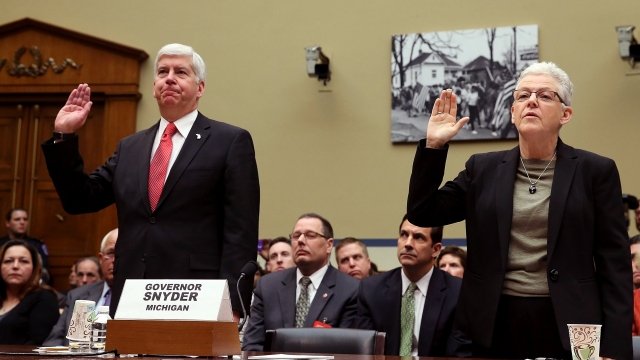 SMS
Congress Didn't Use Its Inside Voice During Hearing On Flint, Mich.
By Katie Link
By Katie Link
March 17, 2016
Michigan's governor and the director of the Environmental Protection Agency had a rough day with Congress.
SHOW TRANSCRIPT

Congress may not know what to do about the water crisis in Flint, Michigan. But it apparently does know who to blame.

In a congressional hearing Thursday, Gina McCarthy, the head of the Environmental Protection Agency, got a lot of heat.

"Did you see this report? Again, a high school student could take this report and determine that kids were being poisoned," Rep. John Mica said.

"You have to look at how the law works," McCarthy said.

"Plausible deniability only works when it's plausible, and I'm not buying that you didn't know about any of this until October 2015. You were not in a medically induced coma for a year, and I've had about enough of your false contrition and phony apologies," Rep. Matt Cartwright said.

"I agree the EPA should've snatched control out of Gov. Snyder's hands even sooner than they did, but Gov. Snyder's administration caused this horrific disaster and poisoned the children of Flint," Rep. Elijah Cummings said.

A bill to help residents in Flint is stalled in Congress over disputes about how it would be funded.