The US Needs Better Nuclear Security. Can Congress Handle It? 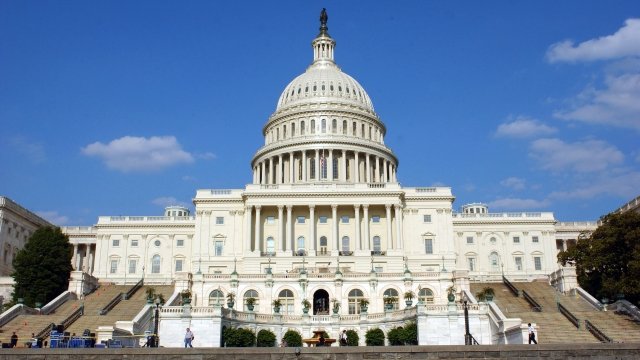 There are a lot of potential concerns that come with working with nuclear materials; protections for workers, the public, for the environment. But what about protecting the actual materials themselves? That's nuclear security which is "the security of nuclear materials and the facilities that house them."

And it's not exactly easy. It takes international cooperation and lots of funds and governmental buy-in. And technology is making protecting nuclear material even harder.

Brosnan works at the Partnership for a Secure America. He and his colleagues just released a report on what the nuclear security threat environment looks like and what the role of Congress should be and why it should be leading on this issue. You probably would guess this is something handled by the executive branch and partly, you'd be right.

For example, the Obama administration held Nuclear Security Summits with leaders from all over the world where countries would make promises on how they would improve nuclear security. Those aren't happening anymore and so far, the Trump administration hasn't signaled whether it will hold another one.

Brosnan thinks that thanks to its role of oversight, Congress should be taking the lead on this issue by setting policy, allocating funds and bringing more awareness to it, no matter who the president is.

"Congress has a unique ability to lead in the long-term. And nuclear security is an issue built around the idea of vigilance. This is not an issue that ever goes away, there is no end state for nuclear security," Brosnan said.

Congress has definitely led on this issue in the past. Notably in the Nunn-Lugar Amendment passed in 1991. The measure allocated funds to help the then-Soviet Union to secure and destroy its nuclear weapons.

But that amount of involvement isn't really around anymore. There is a working group in the House that focuses on nuclear security but generally, no one's really paying that much attention. And in their report, Brosnan and his colleagues found most in Congress don't even understand the issue.

"Knowledge has kind of decayed from that post-Cold War period where people were focused on containing these kind of nuclear threats in the post-Soviet Union," Brosnan said.

Brosnan and his team feel it's important for someone in the US to start leading on this issue.

"It's an open position of leadership; it's a vacuum almost that requires someone or multiple people to step forward and provide leadership," Brosnan said. "I'm very hopeful. Part of that is that I'm an optimistic, idealistic young person but I think the other part of that is that we've seen what this country can accomplish on nuclear security in the past."