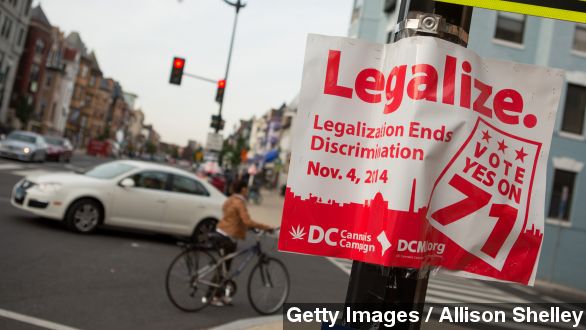 SMS
Congress Blocks D.C. Pot Legalization
By Jake Godin
By Jake Godin
December 13, 2014
The budget bill passed by Congress has some buried language meant to stem marijuana legalization in the nation's capital, but a loophole may save it.
SHOW TRANSCRIPT

Congress' $1.1 trillion spending bill might have killed hopes for pot legalization in the nation's capital.

That’s because, tucked away in the 1,600 page document are two small paragraphs preventing any funds from being used to regulate or tax Schedule I substances in D.C. specifically — and that includes marijuana. (Video via The Washington Times)

That's despite the fact that D.C. voted overwhelmingly in favor of legalizing possession of pot in November. Ballot Initiative 71 passed with 70 percent voting yes. (Video via D.C. Cannabis Campaign)

Once the initiative passed, D.C. lawmakers moved to start regulating pot for sale. But the rider attached to the Congressional budget will block any attempts to do that.

What’s odd is that, in the same bill, there's another provision preventing law enforcement from using federal funds to prosecute medical marijuana patients and dispensaries in 32 states and in Washington D.C.

That provision, says Slate, is the one that’s going to have the biggest impact on marijuana use in the U.S. as it affects the 38 million people living in states with legalized medical marijuana as opposed to the roughly 640,000 people living in D.C.

But it's the congressional back-and-forth in accepting state pot reforms yet blocking them in D.C. that has some people frustrated.

The executive director of the National Organization for the Reform of Marijuana Laws tells Time “Republicans see D.C. as so rock-solid Democratic that they won’t give it the autonomy they are otherwise willing to grant states.”

Pro-pot activists were counting on Democrats like Senate Majority Leader Harry Reid, who said he was against the rider, to fight Republicans on removing it. But, in the interest of moving the spending bill along, they didn't.

But pot legalization might still happen in D.C. thanks to a possible legal loophole and vague legal jargon.

The question is whether there’s a difference between “enacting” a law and “carrying out” a law. The latter two words are absent from the part of the rider that forbids funding to marijuana legalization in D.C., meaning if lawmakers can prove they are simply “carrying out” what voters approved in November, then legalization can go forward.

It’s a jargony peek into just how complicated politics can be on the Hill, with several congressional Democrats telling The Washington Post it was the best they could do while fighting to get the bill passed.

For what its worth, President Obama made his opinion on the issue clear Thursday, saying he believes Congress shouldn’t spend time interfering with the citizens in D.C.