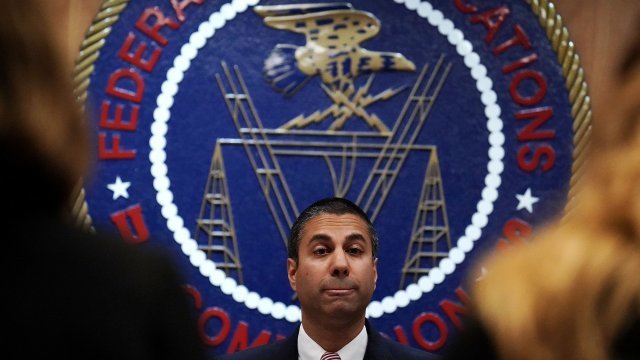 SMS
FCC Chair Explains Why Agency Misled Congress On Fake Cyberattack
By Tyler Adkisson
By Tyler Adkisson
August 16, 2018
Senators finally got a chance to ask the FCC for its side of the story on the fake DDOS attack that shut down its online comment section.
SHOW TRANSCRIPT

The FCC met with lawmakers on Capitol Hill Thursday, and one topic of discussion was an alleged denial of service attack that wasn't actually an attack at all. FCC Chairman Ajit Pai talked about the investigation into trouble with one of its websites — and explained why the commission kept calling it an attack.

Last year, the FCC reported an overwhelming number of visits shut down its online commenting system, when comedian John Oliver urged viewers to file comments in support of net neutrality. The agency characterized the event as an attack, but an internal investigation found the website was simply unprepared to handle a 3116% increase in traffic.

The FCC never corrected the record about its denial of service allegations, and lawmakers want to know why.

Senator Brian Schatz asked, "At some point before the IG report came out, did it occur to you to communicate back with the public that this might not have been a DDOS attack?"

Pai claimed in January of this year, the inspector general asked him not to speak publicly on the issue.

"The OIG then requested, because they had referred this matter for potential criminal prosecutions to the Department of Justice, 'do not say anything to anyone," Ajit Pai said. "It was very hard to stay quiet! … The position I was in was 'do we breach the Office of Inspector General's request for confidentiality?"

For what it's worth, the DoJ never did prosecute. The United States Attorney’s Office for the District of Columbia decided in June of 2018 not to take the case.

And Congress doesn't plan to move on from the DDoS drama just yet. House democrats still want to know more about the FCC's story. They're expecting written answers back later this month.