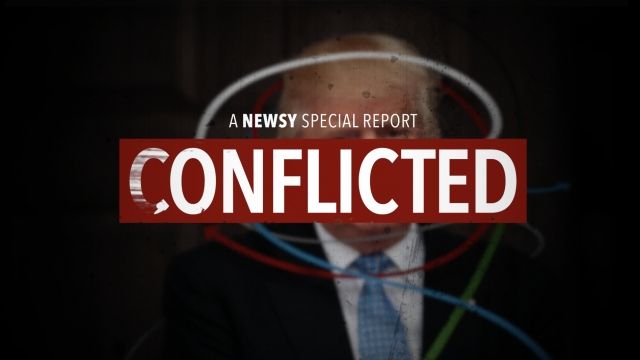 We're in uncharted territory. Donald Trump's message of change on the campaign trail upended American politics. But since the election, Trump hasn't separated himself from his business.

Trump still profits from million-dollar deals with foreign governments and businesses. And top ethics experts — both Republicans and Democrats — say that violates the Constitution. The potential for corruption is unprecedented.

If Trump won't hold himself accountable, who will?

"Conflicted" is a special report on the president. All those conflicts and ethical dilemmas are difficult to untangle. That's why we've researched this story for months and why we spoke with experts, including ethics lawyers and constitutional scholars.

Every day, there are new questions about how the president's sustained ties to his business could affect how he governs. For instance, his recent refugee and visa ban applied to seven Middle East countries, but spared countries in which Trump has done business. That's just one example.

In this report, we'll visualize the new president's financial conflicts in a way you haven't seen before.

The New York Times — "Trump's Empire: A Maze of Debts and Opaque Ties"

The Washington Post — "Trump Leases His D.C. Hotel From a Government Agency He'll Soon Be in Charge Of"

The Atlantic — "Donald Trump's Conflicts of Interest: A Crib Sheet"