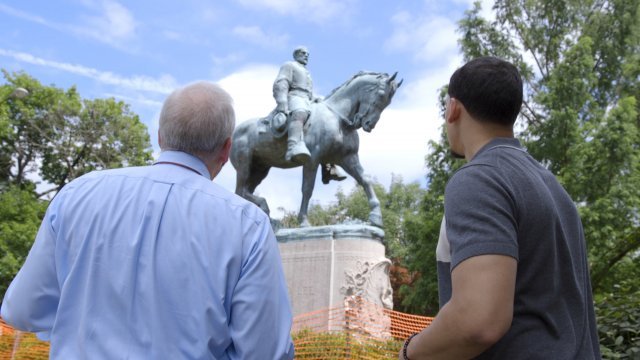 Charlottesville, Virginia — the home of America's third president, the state's flagship university ... and ground zero of the Confederate monument debate.

Last year, white supremacists descended on the city of Charlottesville to protest the potential removal of Confederate monuments that honor Gens. Robert E. Lee and Stonewall Jackson. That "Unite the Right" rally turned into a violent clash between white nationalists and counter-protesters — resulting in dozens of injuries and three deaths.

A year later, the debate around these statues rages on throughout the country — and especially in Charlottesville.

Jalane Schmidt is the co-founder of the Black Lives Matter chapter in Charlottesville. She's been calling for the removal of these statues for more than two years — ever since several hundred people signed a change.org petition calling for the statues to be taken down.

"It's a symbol of white supremacy," Schmidt said. "So if you went all these years with it being in here, why change it now?" Newsy's Jamal Andress asked. Schmidt responded: "Well, this is always the case for social change. I mean, 'Why are you complaining, Dr. King, about segregated restaurants?' It's like, 'We've always been fine with that.' I mean, this is always the counter-argument that's made against social change movements."

The city of Charlottesville held several hearings in 2016 so citizens could voice their support for or opposition to removing the statues.

"What we learned in having more opponents of the statues attend these meetings, these hearings that were held in 2016, is that there were a lot of people that had the kind of passive opinion that they didn't like them, but there just hadn't been a venue to express that — a movement and this sort of thing. But once there was a forum for expressing this [when] the Blue Ribbon Commission people showed up, and they spoke their mind," Schmidt said.

From North Carolina to New Orleans and across the country, Confederate monuments are being debated, fought for and taken down. Since the Charleston, South Carolina, church shooting in 2015, 113 Confederate symbols have been taken down, while more than 1,700 still stand. The state of Virginia has more than 220 publicly displayed symbols and monuments to the Confederacy, including Richmond's famous Monument Avenue.

Lewis Martin is a Charlottesvillian through and through. He's lived here his entire life, he went to the University of Virginia, and his family has been in the area for at least 100 years.

"When you start talking about removing statues or removing public figures, what you are doing is starting to move into Orwellian territory," Martin said.

He's also a preservationist who has been lobbying to keep these statues standing in Charlottesville.

"Back in those days, I think that probably all white people would be considered to have what we consider in this day and age white supremacist views. But I don't think that that's a reason to tear down what those people put up. 'Presentism' is when you apply 21st-century morals to historical figures of another era," Martin said.

Ben Doherty works at University of Virginia's law school and is an activist in Charlottesville with an organization called Showing Up for Racial Justice.

"There's no validity to the 'presentism' argument," Doherty said. "And and I've heard Lewis Martin raise that argument countless times. There were thousands and thousands of people during slavery times who knew it was wrong — black people, for instance. That argument, that 'presentism' argument, is ignoring all of those people. You cannot say that that population, that 52 percent of the population did not think that slavery was wrong."

Doherty was in the streets protesting on Aug. 12 of last year. He and his wife were just yards away when James Fields Jr. drove his car into the crowd of peaceful protesters.

Doherty describes the events of that day as "just chaos." "I saw the first car in line, you know, perfectly innocent car just go projecting out into the intersection with somebody just splayed over the windshield," he said. "And so I was seeing this, but my mind was not processing what was happening, because I couldn't imagine, you know, that somebody would actually just run over a crowd of peaceful protesters."

Doherty and Schmidt say what happened in Charlottesville last year is part of the reason removing these statues is so important, and it's no coincidence that white nationalists chose Charlottesville for their rally.

"As this was being erected, and also the Gen. Lee statue just down the block was being erected in the 1920s, this is when the local Ku Klux Klan chapter was established here. And the inaugural ceremony that took place just a few months before this statue was put in was in June 1921 at none other than Jefferson's Monticello. They literally went to Jefferson's tomb to have their first cross burning ceremony there," Schmidt said.

Since removing Confederate statues from public spaces became a national issue, many have come to the defense of these monuments. But white supremacists and the so-called alt-right have made it a point to rally around these symbols across the country.

"I look to Nazi Germany. If you look at what Hitler did, he co-opted many traditional German symbols to incorporate them into his Nazi worldview. That was taking something that there was nothing wrong with and perverting it, and I think that that's exactly what these white supremacists have done," Martin said.

"The thing about symbols — people rally around them, people are mobilized with them. The problem with symbols is that people are willing to die for them, and even kill for them, as we saw [last] summer. So, yeah, it's important that our civic spaces have symbols that represent our common values," Schmidt said.

The fate of Charlottesville's two most famous statues of Robert E. Lee and Stonewall Jackson are tied up in court. Shortly after the events of Aug. 12 last year, a black tarp was placed on both statues, but a Virginia judge ruled those tarps had to come down. As it stands, a final ruling on whether the statues stay or go isn't expected until later this year.