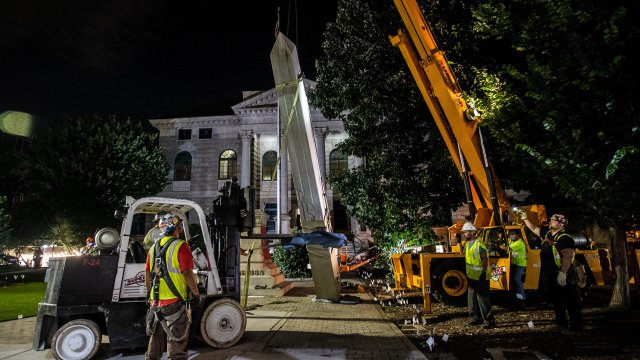 A Confederate monument in an Atlanta suburb came down just before midnight Thursday.

City workers in Decatur removed the 30-foot obelisk called "The Lost Cause" as people cheered and chanted, "Take it down."

Last week County Judge Clarence Seeliger ruled the monument be taken down and safely stored to prevent protesters from removing it.

The monument was erected in 1908 but had become the focus of protests, with activist groups lobbying for it to be removed from outside the county courthouse.

Seeliger said, "The Confederate obelisk has become an increasingly frequent target of graffiti and vandalism, a figurative lightning rod for friction among citizens, and a potential catastrophe that could happen at any time if individuals attempt to forcibly remove or destroy it."