Conditions In Mariupol Worsen Amid Russian Attacks On Ukraine 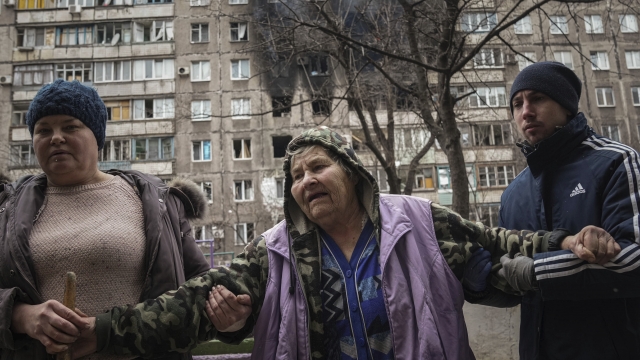 SMS
Conditions In Mariupol Worsen Amid Russian Attacks On Ukraine
By Jason Bellini
By Jason Bellini
March 8, 2022
An estimated 200,000 people want to leave, which accounts for nearly half of the Ukrainian city's population.
SHOW TRANSCRIPT

Mariupol is a city of about 400,000 on Ukraine's south coast. Once a center of industry, it's now a center of misery.

Residential apartment buildings have been destroyed. The victims of Russian President Vladimir Putin's war lie where they fell. No water, no power, no heat. The city has been utterly transformed in a week of war.

It's on the verge of being unlivable and, ringed in by Russian troops, it's also virtually inescapable.

A lack of water for four days claimed a young victim.

Ukraine's president cried out for help for Mariupol Wednesday.

From Lviv, in western Ukraine, Newsy reached Diana Berg. A few days ago, she and her husband made a daring escape from Mariupol.

"That was not war. It was something horrifying," she said. "We knew it was a suicide mission."

NEWSY'S JASON BELLINI: Did you encounter the Russians on the road when you got out?

Berg says she's alive because she was lucky.

BERG: Some of them were pointing their arms at us and we just drove through the column of Russians.

BELLINI: What do you think is going to happen to the people that are still there in Mariupol?

BERG: Oh, it's the most painful question for us now. ... It's either they will die of starvation or bombing, or maybe Russia will provide, I don't know, green corridor to somewhere.

There have been several efforts to get supplies in by bus and civilians out.

An estimated 200,000 people want to leave, which accounts for nearly half of the city's population.

But despite assurances, Ukraine says the Russians won't stop shelling.

One hospital serving Mariupol's injured reported that it's running out of pain medications and anesthesia.

The emergency room doctor says, for days now, he's been working without any electricity or heat.

Some shops opened their doors, telling people to take the few supplies left. Others were looted.

The Ukrainian army is protecting the few bottles of water that remain for distribution.

"This is for women and children and elderly people," one soldier said. "You men can go and look for water."

Berg says she recently read a message board post that someone in Mariupol managed to send. It said: "Thank God it was snow today. Now we have some water, we've melted it on a fire in our yard."

With no real way to get out, food and most critically — water — is a thin line between a child's death and life in a city under siege.

One million children have fled Ukraine in less than two weeks, UNICEF said in a tweet Tuesday, calling it "a dark historical first." There are millions more who have not gotten out yet.