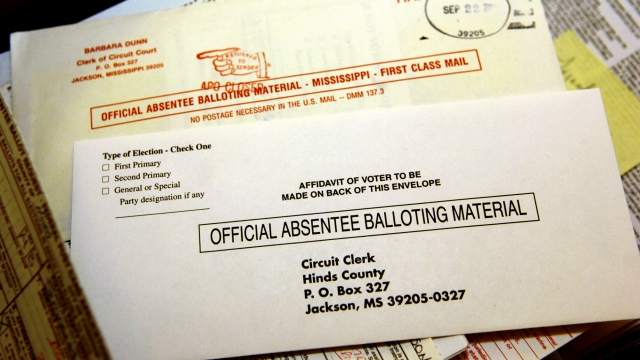 SMS
Current And Former Military Have Concerns About Absentee Voting
By Terace Garnier
By Terace Garnier
September 18, 2020
Nearly three-quarters of the 1.3 million military are eligible to vote absentee, but many are concerned the process won't go smoothly this election.
SHOW TRANSCRIPT

Nearly three-quarters of the 1.3 million active duty military are eligible to vote absentee because they're stationed away from their voting residence, and some are concerned the process won't go smoothly this election.

"I'm a California resident. And with all the wildfires that are going on right now, and the Postal Service already having, like a backup on like delivering items, I think it's gonna be really rough for absentee ballots,” Stephanie Siemens said.

Siemens and her husband moved to Illinois in April. Since then, she says she has not been able to switch her residency from California to Illinois.

“Trying to get a license and everything like that has just been hell, basically with COVID. And they keep on pushing back the, the dates where people can renew their license and stuff and you get the what is that the true ID or whatever, whatever,” Siemens said.

She is just one one thousands expected to vote absentee this election. While many serving are used to voting absentee, especially when stationed overseas, she says the process this year has been very difficult.

“Oh, it's like a 180. …. So just just a different outlook of how easy it was then to how hard it is right now. I don't even know, you know, I can't do anything. So now I am waiting on the absentee ballot, which is up in the air,” Siemens added.

As seen in Facebook posts, there are many that are not concerned about voting whether absentee or in person… but some are very vocal about the rhetoric regarding voter fraud.

“The only concern I have is the president actively trying to stop mail-in voting, because there has been no problems with it in the past,” Navy veteran Kate Cummings said.

Cummings says she voted absentee during the years she was stationed in California.

“If they can't mail their ballot, if they can't take their ballot packet in person, my first suggestion would be try to find a friend or a relative that you trust that can. And if you can't do that, you will have to trust the mail, unfortunately, but being fully aware that putting it back in the mail means that President Trump has the chance to affect your ballot because he is affecting the mail system right now,” Cummings said.

According to the Federal Voting Assistance Program, the number of active duty military that voted has gone down in recent elections.

And the military, as it has done in the past, is fighting to ensure servicemembers and their families have all the tools needed to vote.

“A lot of the states are allowing you to email your federal postcard application right into the election office. So that's been my main go to if your state allows it to email it in, but I would first recommend that they go to FDAP.gov," said Erika Patterson, a voting assistance officer.

Patterson says if servicemembers or veterans are concerned about delays they can vote online and via mail to make sure their vote is counted.

Once they have submitted their votes Patterson encourages everyone to make sure they follow up with their local election office.

“I've done it myself. I just call in: 'Ms. Marika Patterson, can you just confirm that you've received my FVPA?' And they were like, 'Absolutely.' I'm just recommending they call or email depending on how they submitted that FVPA,” Patterson said.

Many residents across the country are receiving their mail-in ballots this week and, with the election just around the corner, the best advice is to get those absentee ballots in as soon as possible. Terace Garnier. Newsy. Maryland.