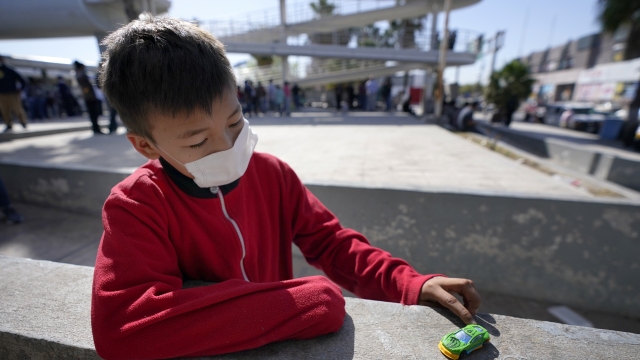 SMS
Biden Admin. Criticized Over Emergency Sites For Migrant Children
By Newsy Staff
By Newsy Staff
March 19, 2021
More than 13,000 unaccompanied minors are in U.S. custody right now. But the Biden administration is still refusing to call the situation a crisis.
SHOW TRANSCRIPT

The Biden administration is facing questions about the safety of emergency sites set up to hold migrant children.

The government stopped taking migrant teens to a converted campsite in west Texas.

According to the Associated Press, more than 10% of the camp's population tested positive for COVID and at least one child had to be hospitalized.

According to reporting from NBC News, more than 500 migrant children have been in custody longer than 10 days. That's more than a week over the legal three-day limit.

A White House official says the administration will be more aggressive about telling migrants not to come to the U.S., but Republicans are calling for a stronger response from President Biden.

"Two weeks ago, I sent a letter to President Biden requesting a meeting to discuss the border crisis. As of today, I still have not received a response from him or anyone in his administration. But in that short time period of two weeks, the situation at the border has only worsened," said Minority Leader Kevin McCarthy. "Our border agents are overwhelmed and they deserve the help of their federal government. I'm calling on to put politics aside, let's work together for the security of our nation."

More than 13,000 unaccompanied minors are in U.S. custody right now. But the Biden administration is still refusing to call the situation a crisis.