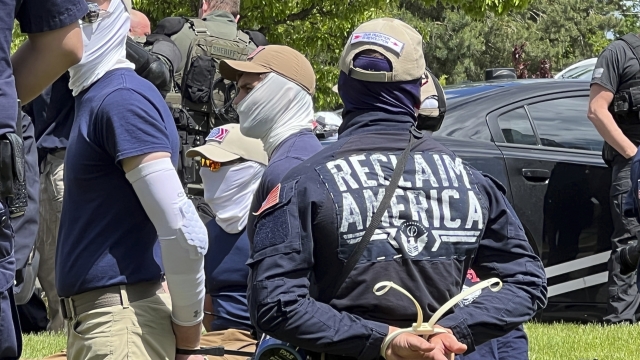 Social media video was trailing a far-right Twitter influencer who sought to disrupt an LGBTQ pride event in Arlington, Texas Sunday. With her, a Dallas Fort Worth chapter of The Proud Boys.

They're a well-documented violent fascist gang that's also in the spotlight of the Congressional committee investigating the January 6 assault on the Capitol to overturn the presidential election.

"This latest stuff, where you have these radicalized groups that, you know, seem to delight in the cruelty — That's new," said Rafael McDonnell, communications manager at The Resource Center.

LGBTQ advocacy groups in north Texas are alarmed by the recent harassment and disinformation campaigns of far-right social media influencers during Pride Month that are also attracting white nationalist groups.

"And I think that is, in part, fueled by some of the governmental response to LGBTQ folks, whether it's Governor DeSantis in Florida and 'Don't Say Gay' and some of the stuff," McDonnell continued. "And then Gov. Abbott here in Texas, you know, coming after the health care of transgender children."

On June 11, Idaho authorities intercepted 31 members of Patriot Front, a fascist white nationalist group which seeks to create a "whites-only America." According to documents, an eyewitness said members gathered like "a little army." Police say they wanted to violently disrupt a pride event in the city of Couer d'Alene.

David Cunningham, a sociologist and expert on white supremacist and white nationalist groups says whether it's Patriot Front or The Proud Boys, both groups are showing up with conservative influencers to recruit more people into extremism.

"As we saw this past weekend, showing up at public events to kind of promote ideas, but to do so in a way that is quite menacing, intimidating by design and terroristic when you see it in the context that we saw it in in Idaho," he said. "And what I think we're seeing is a whole range of issues that are have been traditionally part of that white supremacist ecosystem, which are really about — they're framed in terms of reducing the power, visibility and presence of, quote — unquote, traditional and right for white Americans."

Almost all carried small devices to record video and fashioned their own body armor using shin guards or putting hardened plastic in their ball caps.

In a propaganda video posted on alternative social platforms prior to their arrests in Idaho, members appear spurred on by their leader, training with shields in a mock riot. Sparverius, which monitors extremist groups, says this is evidence Patriot Front prepared for violence.

"I think underlying that, we see a theme continuous current as well of the threat of mass violence, of the threat of domestic terrorism attached to this. And so, you know, this this is a really tenuous and fragile time, because i think the movement is simultaneously both of these kinds of things," Cunningham said. 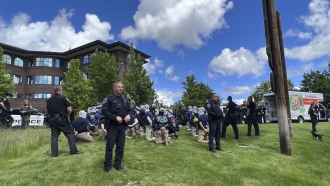