Concern And Protest After Rittenhouse Verdict 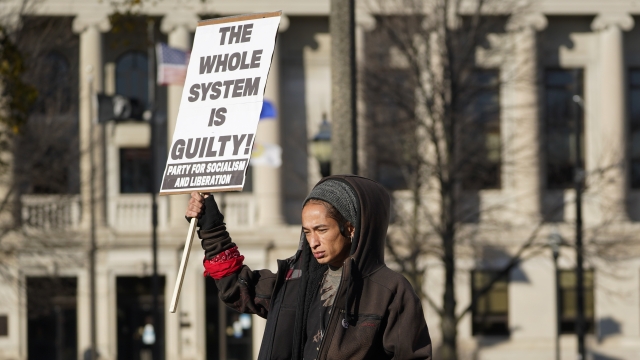 SMS
Concern And Protest After Rittenhouse Verdict
By Haley Bull
By Haley Bull
November 22, 2021
Demonstrators object to the verdict in the Kyle Rittenhouse trial. Activists say there's a plan to appeal the decision.
SHOW TRANSCRIPT

After a jury acquitted Kyle Rittenhouse, several dozen people gathered outside the courthouse in Kenosha, Wisconsin, in a show against the verdict.

"This wasn't covert, it was overt, and I hope everybody has their eyes open. We are fighting racism head-on," said Justin Blake, the uncle of Jacob Blake.

"It feels like these men that died, that their lives do not matter, and they do matter. There are loved ones that are left behind that are grieving them right now and we have no closure to that,” said Rosenbaum's fiancee, Kariann Swart.

"We will not accept this verdict. We have other alternatives and we have other options and we're going to use peace and protest and civil disobedience and people using the power that we have, the means that we have, to make sure this does not happen again,” said Bishop Tavis Grant with the Rainbow PUSH Coalition.

They also criticized President Biden and Wisconsin Gov. Tony Evers in their responses. Grant said there's an effort to appeal to the Department of Justice to review the case.

After rallying, the group marched through the streets chanting for justice on a windy day in Kenosha.

"I guess I should say I’m not shocked but I was hopeful that maybe he would go to jail,” said Lorna Revere, who came in from nearby Racine.

"We feel it's fairly obvious the state of Wisconsin has a problem with the gun laws here," said Ivy, who traveled from Chicago.

People stopped to watch as the group walked by.

There's a range of reactions to the verdict though, from those at the rally to those who welcomed the not-guilty decision.

"I don't for a minute believe a bunch of 17- or 18-year-olds are going to go out, arm themselves and go to demonstrations. That's not what this case was about. This case was about the difference between a demonstrator and a rioter," said Mark Richards.

Overall, despite tension leading up to the verdict and concerns about the reaction, Kenosha has remained calm.