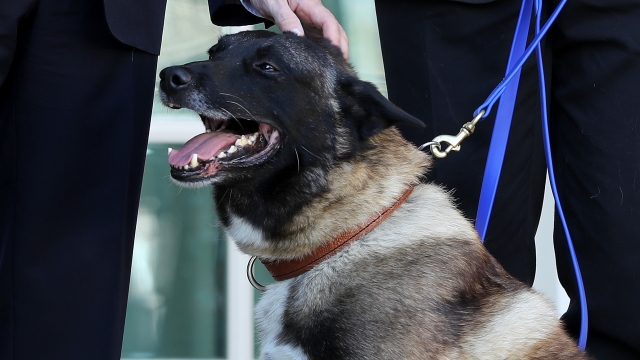 Conan, the military service dog who helped in the raid that led to the death of ISIS leader Abu Bakr al-Baghdadi, was honored Monday during a ceremony at the White House.

"The dog is incredible, actually incredible. We spent some good time with it, and so brilliant, so smart — the way it was with the special forces people that it worked with," President Donald Trump said. "And, for obvious reasons, they can't be out in front of the media. But they did a fantastic job, Conan did a fantastic job, and we're very honored to have Conan here and to have given Conan a certificate and an award that we're going to put up in the White House."

In President Trump's national address on Baghdadi's death, he mentioned that "a beautiful dog ... was injured" during the raid on the ISIS leader's compound last month. It is believed that Conan was hurt after being sent into an underground tunnel where Baghdadi was hiding. The tunnel collapsed when Baghdadi detonated a suicide vest.

President Trump tweeted a picture of Conan shortly after his speech and followed it up with a photoshopped picture of himself awarding Conan a paw-shaped Medal of Honor.

Although the president said Monday there had been a chance the Belgian Malinois "was not going to recover" after the raid on Baghdadi, he said Conan "recovered, actually, very quickly and has since gone on very important raids."