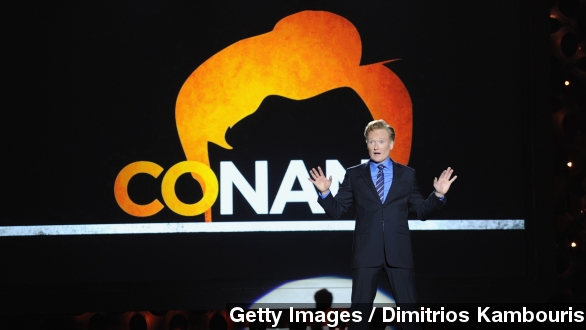 SMS
Conan O'Brien Brings Show (And U.S. Entertainment) To Cuba
By Matt Moreno
By Matt Moreno
February 16, 2015
Conan's late show will be the first to film in Cuba since 1959.
SHOW TRANSCRIPT

For the first time in more than 50 years, an American late show is being filmed in Cuba.

A show rep told Deadline, "The episode is intended to give O’Brien’s audience a rare glimpse into Cuban daily life."

But there aren't many other details known about what to expect from the show other than that. What we do know, though, is this is another move to bring American entertainment to Cuba.

The Broadway musical "Rent" opened in the country in late December — the first Broadway show to reach the country since U.S.-Cuba relations soured after the Cuban revolution. (Video via Sun-Sentinel)

"A true sign of change in Cuba. The arts staging a huge comeback tonight."

"Rent" was planned before the U.S. and Cuba relations opened up, but a trip to Havana by Jay-Z and Beyonce wasn't.

The two caused a stir when they were spotted in Cuba back in April 2013. Under the embargo rules, U.S. citizens couldn't go there for tourism purposes. (Video via OnCuba)

That trip was deemed legal, though, after it was revealed the Office of Foreign Assets Control granted them visas for a so-called "educational exchange" trip.

What we likely won't see in this latest late show from Cuba is an appearance from Fidel Castro.

Castro's health has been heavily speculated about ever since he left office in 2008, including plenty of rumors about his death.

Earlier this month, the Cuban government released the first photos of Castro in five months, showing him, as The Washington Post notes, alive and well.