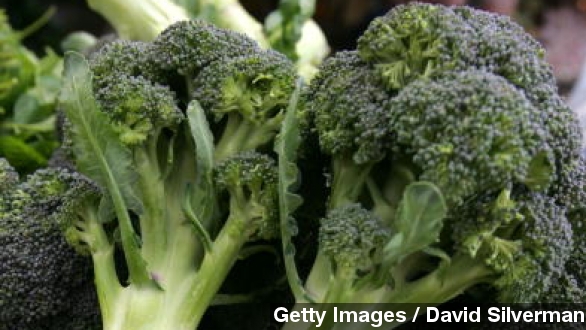 SMS
Compound Found In Broccoli Could Ease Autism Symptoms
By Rosie Newberry
By Rosie Newberry
October 14, 2014
A new study examines whether a compound found in broccoli and other cruciferous vegetables might help with autism symptoms in young males.
SHOW TRANSCRIPT

Broccoli might help ease autism symptoms. Based on new research published in the Proceedings of the National Academy of Sciences, could the findings give the age-old motherly phrase "eat your vegetables" a whole new meaning?

Yes and no, depending how you view the results. The study in question looked at 44 males aged 13-27 with moderate to severe autism. Those who did not receive a placebo were administered pills containing the compound sulforaphane, which is found naturally in broccoli, cauliflower, kale and cabbage. (Video via CBS)

On the positive side, after 18 weeks, a whopping 46 percent of the males receiving the compound showed improved social skills. About the same number exhibited better verbal communication, and more than 50 percent reined in "aberrant" behavior tendencies.

Some study participants even took on new skills such as shaking hands with others and making eye contact.

In fact, study co-author Dr. Andrew Zimmerman told the The Telegraph, "When we ... revealed who was receiving sulforaphane and who got the placebo, the results weren't surprising to us, since the improvements were so noticeable."

That's probably because the subjects who received the placebo showed no improvement in any category, which seemed to verify sulforaphane's positive impact. But of course, this broccoli study needs to be taken with a pinch of salt.

First, it's critical to note that one-third of all participants who received sulforaphane showed no symptom improvement whatsoever. Second, the positive effects of the compound wore off four weeks after subjects stopped taking it. And a third, worrying point is that two participants receiving the compound had seizures during the course of the study.

The two males in question each had a history of seizures, but the study authors noted that no participants receiving the placebo had seizures during the study, so they must consider it a possible side effect.

Finally — and perhaps most frustrating for parents looking for an easy answer — broccoli from the grocery store is not going to give kids with autism the same benefits as the pills. The amount of sulforaphane is much higher in pill form than is found naturally in the leafy greens, and higher doses are not commercially available right now. (Video via KCPQ)

It seems the most important point to draw from this study is that scientists are calling it intriguing.

Susan Hyman, chief of neurodevelopment and behavioral pediatrics at the University of Rochester Medical Center, told ABC, "The trial needs to be replicated and evaluated in larger and more age-diverse samples." She added, "But the data is certainly worth pursuing."

The potential of such a breakthrough is far-reaching, as the National Autism Association says 1 in 68 children are now affected by autism.