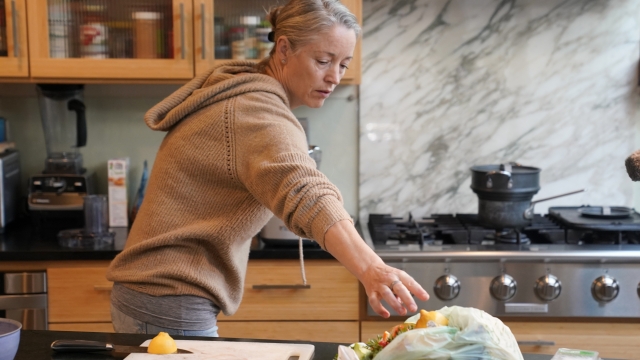 About 40% of food is wasted in the United States, going from plate to trash can to garbage truck to landfill. The U.S. Environmental Protection Agency says wasted food has created about 15% of the nation's methane emissions. That contributes to global warming as methane from the rotting food helps trap heat in the atmosphere.

Starting this month, there is a California effort to keep waste like banana peels, chicken bones and leftover veggies under a mandatory food recycling program where residents will have to separate compostables from the rest of the trash.

"It takes a little education and a little bit of training for people to get used to anything new," Ned Spang with UC Davis said. "I think this is important. I think this is a good way we can really just tell the story of food and the fact that we really need to do what's called 'closing the loop.'"

By banning food waste from garbage bins, the idea is to turn food scraps into compost or energy rather than let them decay and emit methane.

Residents will dump the separated kitchen waste into special bins along with yard waste. Then, the waste will be brought to a facility that can compost it or use a process called anaerobic digestion where bacteria breaks down organic matter and can be used to create fuel.

Ramin Yazdani is the director at Yolo County Integrated Waste Management. He said the effort means something for new generations.

"It means that we just don't bury and forget about it," Yazdani said. "We're actually taking responsibility and not leaving it for a next generation to do something."

Davis, California, has been recycling food since 2016. Residents like Joy Klineberg said it doesn't take much to get used to separating food waste from other recyclables.

"It's really easy," she said. "I mean, all you're changing is where you're throwing things. It's just another bin."

And to help the planet, Klineberg says it's a small inconvenience.

"I appreciate that we can be making a change without really impacting our lives very much," she said.

Setting the January goal has been easier than meeting it.

Major cities like Los Angeles, San Diego and Sacramento didn't have their programs ready to go by the start of the year. But state officials promise the program will be rolled out gradually in the coming months.