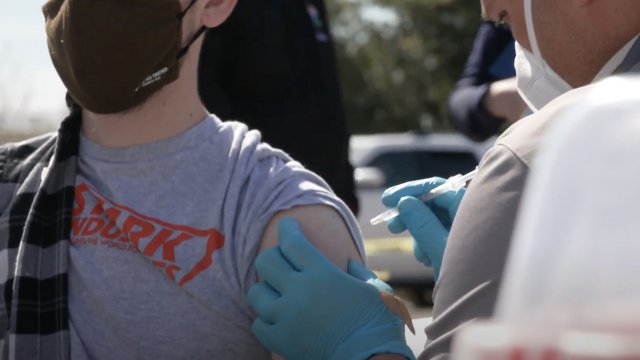 Health experts say past medical abuse of Latinos, government mistrust, lack of access may be feeding vaccine shortfall among Hispanics.

"Significa el sol. The Sun." Maria Carolina shows the masks she’s made by hand, to help protect her community.

"It has been so difficult living through the pandemic, the protection was not there and it was so easy for any of us to become ill," Carolina said.

In Florida, where she lives, 41% of COVID cases are Latino. But only 22 percent those vaccinated are Latino.

Why is this still happening? There are several contributing factors: Accessibility, lack of information in Spanish, vaccine times that conflict with the schedules of many who are essential workers. And documentation.

That’s the situation with Maria. She was able to get her first dose during a hospital stay, but can’t get her second because she doesn’t have the required Florida driver’s license or state-issued ID.

And then there are people who don’t trust the vaccine, the drugmakers, the government. And you don’t have to look back far to see why that distrust runs deep for many Spanish-speaking women.

It doesn’t end there. In September 2020, a whistleblower complained of forced hysterectomies on women detained in ICE facilities. It fuels skepticism that isn’t isolated to one region.

"Those resonate in people's minds. Is this vaccine going to make me sterile? Is this a way for the government to make us not to be able to have children, children being a wealth of our community," Dr. Viviana Martinez-Bianchi, a family doctor and the director of Health Equity in Family Medicine and Community Health at Duke University told Newsy.

Battling the doubt isn’t easy. For Dr. Martinez-Bianchi, it means spending extra hours out in her community, to help.

"This weekend we vaccinated two thousand seventy five Latinos in six in six churches in it and a credit union, the Latino trade union. And then I realize, oh, and we have ninety thousand people haven't gotten a vaccine yet," she said.

"If they didn't want to take it two or three weeks from now, as they find out that family members have taken the vaccine, they feel more comfortable and they're taking it," Aaron Ortiz, CEO, La Familia said.

Hayward California, the trust is there…if it's coming from La Familia --a multicultural organization with a 40-year track record of engagement in the Latino community. They have been working with FEMA and the state to be a trust broker of sorts, for vaccines.

Their staff calls hundreds a day, in Spanish. Focusing on cultural competency and language- CEO Aaron Ortiz says-is key to their successful turnout.

"So how many people have you vaccinated here total, and how many of them are Latino?"

"So total that have taken the vaccine here, close to 3200 with the week and a half . And close to 80 and 90 percent of the people that have been vaccinated here have been Latinos."

But the trust in Hayward, isn’t as commonplace as it should be, Martinez-Bianchi says.

The Biden Administration has promised $6 billion dollars to get vaccines to Community Health Center sites like this one. But Ortiz says they could still help more people with a larger supply, and have even begun buying their own from a third-party supplier.

Moving forward, analysts think that Latino vaccination numbers could get better, but it will really vary depending on the experiences people have had with the healthcare industry where they live.