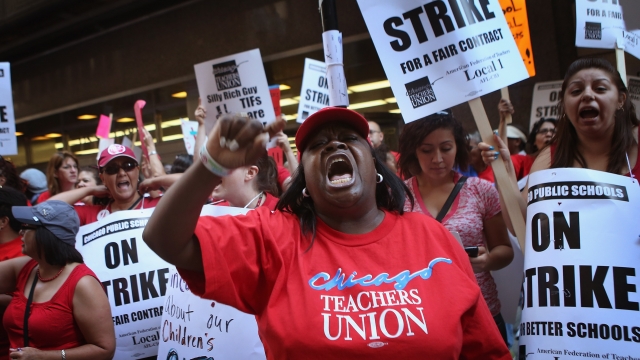 For weeks, Chicagoans have watched as Mayor Lori Lightfoot and the Chicago Teachers Union have gone head to head, attempting to hash out a new deal that would keep more than 25,000 teachers from going on strike Thursday.

In the process, numerous aspects of negotiation talks have come under review by residents and reporters alike. One such aspect? How this city administration compares to its predecessor in addressing disputes with the union and other education groups.

In September of 2012, Chicago teachers went on strike for the first time in 25 years, under former mayor Rahm Emanuel. Prior to the strike, Emanuel had reportedly cursed at the then-union president Karen Lewis, persuaded the Illinois General Assembly to raise the necessary strike-vote threshold for the union to 75 percent and pushed to enact education reforms that would tie the teacher evaluation system to standardized testing results — all to the dismay of the union and other school staff groups.

More than 29,000 teachers went on strike for seven days to protest Emanuel’s actions and push for pay increases and smaller class sizes, among other things.

At one point Emanuel asked the court for a temporary injunction to end the strike.

Concessions on both sides ultimately brought the strike to a halt, and more 350,000 students returned to classrooms.

While there was no clear winner, neither side walked away a loser. Nonetheless, the relationship between the two was hardened. Lewis briefly pursued a bid for mayor against incumbent Emanuel in 2014 but withdrew her bid because of health concerns.

The CTU backed Cook County Commissioner Jesus "Chuy" Garcia for mayor in that race, but Emanuel won. In the 2019 election, the union backed former teacher Toni Preckwinkle, but it was Lightfoot who went on to win.

Which brings us to Lightfoot and her administration. The union wants smaller class sizes, additional support staffing — such as nurses and librarians — and better pay. The CTU wants all of its demands to be addressed in writing.

According to the union's website, the vote to strike “stands as a mandate from CTU members for Chicago Public Schools to uphold promises of equity and educational justice made by Mayor Lori Lightfoot.”

Lightfoot and her team worked to meet some of the union's demands prior to Thursday's strike date. They dropped a proposal to reduce teacher preparation time, and added support for homeless students. They also offered a 16 percent raise over five years.

Both sides have said the other has not done enough to make a deal happen sooner. The union has also criticized Lightfoot for using attorney James Franczek as the top labor negotiator in this dispute, who also served in that role under Emanuel.

According to the Chicago Tribune, union president Jesse Sharkey said he sees the conflict as a critical early test for Lightfoot. Sharkey said it will show if her governing philosophy is similar to Emanuel or the Democratic Party’s left-leaning base. In response, Lightfoot has said, "I think there’s a ton of differences, not the least of which is, I’m not Rahm.”