How Does Turnover In Trump's White House Compare To Other Presidents? 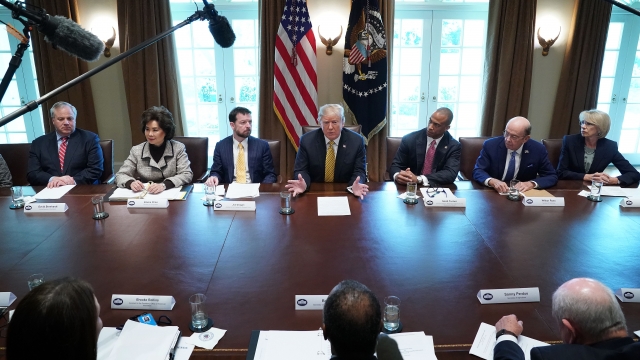 Resignations have been a recurring headline during the Trump administration, with some people calling out the president for an unprecedented amount of turnover. But how does his administration compare to his predecessors?

Let's start with President Trump's Cabinet. We looked at 22 senior positions, including the Cabinet secretaries, agency heads, the U.S. ambassador to the U.N. and others. Half of the officials in those 22 positions have resigned or been forced out in the first two years of the Trump administration.

We should note that every president gets to build their own Cabinet, so direct comparisons between administrations can be tricky. For example, of the 22 positions we looked at, only 19 even existed when President George W. Bush took office in 2001. He replaced the officials in five of those jobs during his first term, but he also created the position of Homeland Security secretary, among others, before leaving office.

Beyond those department and agency heads, there's also been some notable turnover in the White House itself.

President Trump is on his second press secretary, Sarah Sanders, and his third chief of staff. Mick Mulvaney currently holds that job in an "acting" capacity. The president's also on his third national security adviser — John Bolton was preceded by Michael Flynn and H.R. McMaster. The senior position with the highest turnover under President Trump is his communications director. Bill Shine was the fifth person to hold that title, and he stepped down in early March. The president hasn't announced who his sixth communications director will be.

Compared to the previous three administrations, it looks like President Trump is on track to have a higher rate of turnover. President Obama, for example, had five different chiefs of staff, but that was through all eight years in office, not just two. And President Bill Clinton had five different communications directors, but again, they covered both his terms.

But there are a couple caveats worth noting. First, some turnover is expected in any administration. Government jobs can be daunting and stressful. And second, an administration is way bigger than 22 people — try closer to 2,000. Not all of those people make headlines when they leave their jobs, so it's hard to say what an administration's retention rate looks like overall.