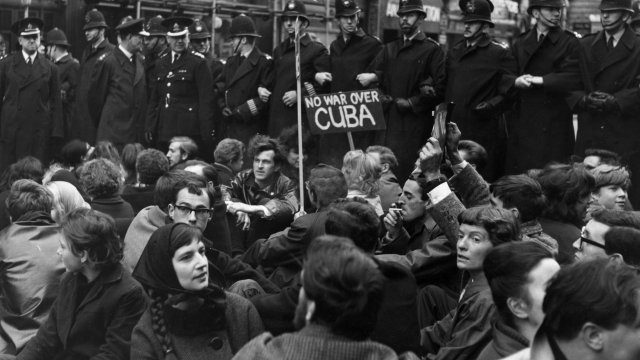 For 13 excruciating days in October 1962, no one knew if Cuba would attack the U.S. with Russian missiles. President John F. Kennedy quarantined the island, stopping Russian cargo and allowing in only humanitarian aid.

He said: "I have directed the Armed Forces to prepare for any eventuality, and I trust that in the interest of both the Cuban people and the Soviet technicians at the sites, the hazards to all concerned and continuing this threat will be recognized. It shall be the policy of this nation to regard any nuclear missile launched from Cuba against any nation in the Western hemisphere as an attack by the Soviet Union on the United States, requiring a full retaliatory response upon the Soviet Union."

If it did come to nuclear holocaust, Kennedy told the nation: "The fruits of victory would be ashes in our mouth, but we won't shrink from that risk at any time. It must be faced."

But Kennedy's words show he did not relish this fight; the horrors of World War II were all too recent.

Fast-forward to 2017, and President Donald Trump's staff says he's trying to defuse the North Korean conflict, even as he issues threats of "fire and fury."

In tone, those words couldn't be further from Kennedy's reluctance in 1962. But in muscularity, there are similarities.

James Lebovic, professor of political science and international Affairs at The George Washington University, talked with Newsy's Chance Seales, host of "The Why," about the overlaps and lessons learned from the Cuban missile crisis. 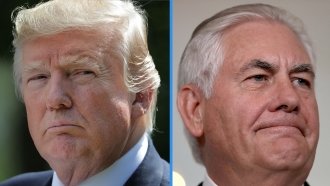 CHANCE SEALES: We've heard a lot of comparisons lately to the Cuban missile crisis and what's happening right now between the U.S. and North Korea. What are some of the parallels?

JAMES LEBOVIC: What the Russians were planning on doing was placing missiles that did not have this long range, this intercontinental range, in Cuba, which would allow them to collapse the distance and hit targets throughout much of the United States.

The similarity is both countries were close to being able to threaten U.S. territory. These kinds of conflicts really do require "cool-headedness." Unfortunately, we are not seeing that kind of conduct now on either side, and frankly, it's troubling.

SEALES: Do you see the U.S. as better prepared in 1962 or today to respond to these nuclear threats that are abroad?

LEBOVIC: We are not in any better position. But in the end, it comes down to who you identify as the adversary. I think what most Americans don't realize is just how formidable these current nuclear arsenals are.

SEALES: Looking back to those 13 days in the '60s that are so famous now, and you read accounts of President Kennedy staying up all night, couldn't sleep: He knew at any moment something could happen, and he worried that it would. Are there any lessons learned from back then that Trump and members of his administration might apply to this situation?

LEBOVIC: A lesson that could be learned from that is to avoid rashness and rash decisions. They, from the beginning, did rule out doing nothing, but they were very cautious about moving too quickly and too forcefully.

In part (this points back to a profound similarity between Cuba and North Korea right now) military action could not assure that the threat would be entirely diminished.

In the case of the Cuban missile crisis, the Air Force could not assure U.S. leaders that they could get all of the missiles.

In the case of North Korea, I don't know if with a preemptive strike, the United States could destroy all of the North's nuclear capabilities.

The military is well aware of these potentials. That's one of the reasons they are not cavalier about this military option. So Trump would be well-advised to seek counsel and listen to what they have to say carefully.