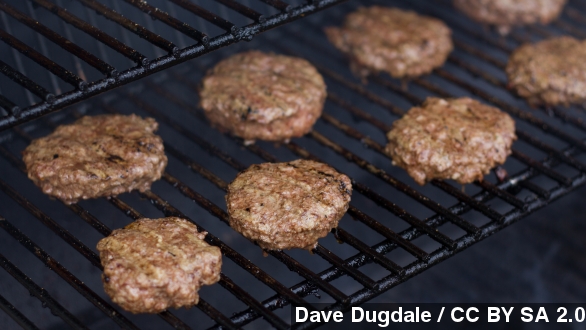 By Danny Matteson
October 6, 2014
The meat was recalled after four separate consumer complaints of pieces of metal in the food — some reportedly as big as 3 mm in size.
SHOW TRANSCRIPT

We're guessing this isn't something you would want to bite into at your next tailgate.

KRIV: "About 91,000 pounds of ground beef that may be contaminated by pieces of metal is being recalled."

ROBIN MEADE FOR HLN: "One person reportedly chipped a tooth from metal in the beef, they say."

The more than 45 tons of ground beef products were packaged by Sam Kane Beef Processors out of Corpus Christi, Texas. (Video via CNN)

And the meat was recalled after four separate consumer complaints of pieces of metal in the food — some reportedly as big as 3 mm in size. (Video via KDAF)

According to reports, the beef was shipped only throughout Texas — with most of it going to H-E-B grocery stores. (Video via KFOX)

FOX NEWS: "The USDA says the recalled packages were produced between Sept. 9 and 18 with sell-by dates between Sept. 29 and Oct. 8."

KOKH: "All of the beef in that recall will have the number 337 stamped on the USDA inspection mark."

And it's not the only report of foreign objects in the food the company has seen in recent weeks.

One Texas woman says she found a piece of metal in an H-E-B beef product not covered by the recall this week as well.

KXAN: "Right when I looked down at it there was piece of metal right on top. A small piece."

And according to this USDA recall report, Sam Kane Beef Processors also recalled more than 2,600 pounds of beef in late September — that due to pieces of "blue plastic" in the meat.