It's Hard To Incentivize Companies To Stop Hiring Undocumented Workers 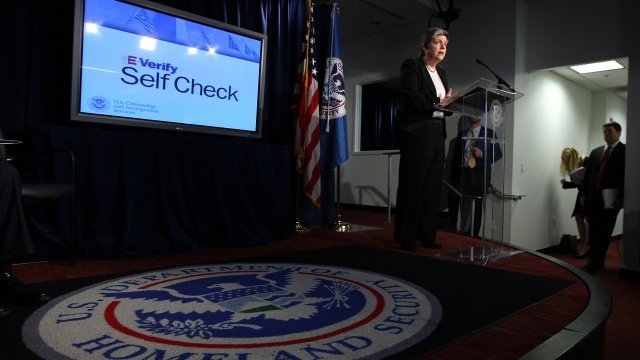 E-Verify looks like the perfect digital-age screening for new hires nationwide. A quick, simple eligibility verification. The program lets employers electronically take the info new employees provide on their first day of work and compare it with data stored at the Social Security Administration and the Department of Homeland Security.

The program is mandatory for federal agencies and most federal contractors. It's available to employers in all 50 states. So far, at least 21 states have passed laws requiring its use, to some extent. The CATO Institute has been all over the rollout, and the results are mixed.

It looked at four of the states involved and found that there were fewer E-Verify queries than there were new hires. In Arizona, the first state to make it mandatory, only 74 percent of new employees got screened in 2015. Still, that was the highest of the four states. One possible reason could be the added paperwork; there's a multi-page memorandum of understanding, plus a User Manual over 130 pages long.

In 2011, states across the South threatened to pull the business licenses of companies that didn't use E-Verify. Then what happened? Nothing. Seven years later, and not a single license had been canceled.

Politics seems to be the reason why. Analysts found that state lawmakers "got all the political benefits of supporting immigration enforcement but not the political cost of hurting business." In another report, CATO noted that E-Verify has an accuracy issue. A government-ordered audit found that an estimated 54 percent of unauthorized workers were incorrectly found to be authorized.

This was partly because of document fraud, including Social Security numbers belonging to dead people that E-Verify failed to flag. One goal of E-Verify was a reduction in the number of undocumented workers and an increase in the number jobs for legal workers.

A 2017 analysis by the Federal Reserve Bank of Dallas found the part about reducing the number of illegal workers to be accurate. In Arizona, for example, the number dropped 33 percent, below what was projected without E-Verify.

But another study found in Arizona, many workers didn't leave — they ended up as day laborers who were paid "under the table." Regardless, a Washington Post-ABC News poll from last year shows 79 percent of Americans support E-Verify

So for now, E-Verify will be used in half the country. And in the other half, HR reps will do their own checks, trying to figure out who's allowed to work in the U.S. and who's not.