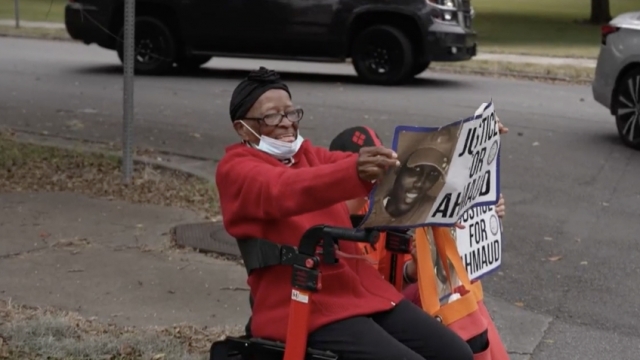 SMS
Community Gathers To Support Arbery Family
By Haley Bull
By Haley Bull
November 8, 2021
A group of people have been sitting outside the Glynn County Courthouse showing support for Ahmaud Arbery's family during the trial over his killing.

Ahmaud Arbery's killing in February 2020 sparked outcries across the country. Now over a year and a half later, a group of people sit outside the Glynn County Courthouse showing support for his family during the trial.

Chants of "Justice for Ahmaud Arbery" ring out daily. Perhaps shouting the loudest is Annie Polite, 87.

She shows her support with each shout, each step. She doesn't miss a chance to march through the streets as far as she can. It's not a first in her lifetime.

"I've been marching forever," she said, recalling a march for women in 1976.

What keeps her going?

"Because the same thing is going on now that went on when I was a child growing up," said Polite.

Polite grew up in Brunswick, Georgia. She moved to New York but has been back in town for about two decades now.

Now each time the Arberys leave the courthouse, she's among the voices they hear.

"That's all we are asking, justice for Ahmaud. Too many young men and women who have been killed and have not gotten justice. You know, it's time now for us to realize that we're all here together and we should learn to live with each other," she said.

Polite raised three boys and worked as a social worker for 25 years helping children and people battle addiction. Now she inspires others to be at the courthouse too.

From her seat, she offers this: "God requires that we look up at each other. You know, we love each other. You know, you may have to go home and drink a cup of coffee, have a little sip to get through some of the things that have happened," she said. "But certainly he will see you through. And he's gonna see the Arbery family through, also. So we look forward to seeing this come to justice for Ahmaud."