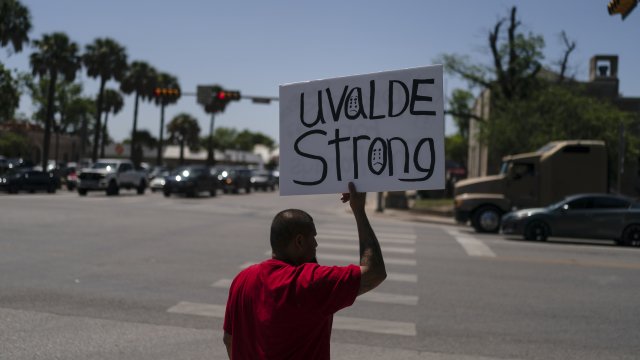 SMS
Experts Say Community Support Can Help Mental Health After Trauma
By Amber Strong
By Amber Strong
May 26, 2022
Psychiatrists say community support can be the start to healing after a group experience, even if a person isn't directly impacted.

In the wake of tragedies, communities have a way of coming together, of wrapping their arms around one another, seeing each other’s pain.

With repeated mass shootings, it’s almost as if the country is collectively grieving.

Less than two weeks after the shooting and murders of 10 Black community members in Buffalo, New York and a doctor at a Taiwanese church in California, families in Texas, are mourning the 21 victims at Robb Elementary.

The pain and anger are resonating across the country.

This experience and the trauma that follows an event like this one is shared by survivors and parents, after Columbine, Sandy Hook, Parkland.

“I had flashbacks watching the parents waiting for hours to hear whether their children were going to be found alive, hoping against hope," said Scarlett Lewis, mother of a Sandy Hook Elementary victim.

“What I've seen in Parkland and these other horrible shootings, it changes your life forever," said Cameron Kasky, survivor of the 2018 shooting at Marjory Stoneman Douglas High School.

"A person may have what are called trauma symptoms, and that may be experienced by the community and re-experienced if they're exposed to things that remind them of the trauma that they have experienced already," said Dr. Flavia DeSouza, psychiatrist and professor at Howard University.

Psychiatrists say community support can be the start to healing.

"They kind of rally around each other and support each other and have that kind of support group within the friends and family, within the survivors, within the other people who are there," said Dr. Jessi Gold, psychiatrist and professor at Washington University in St. Louis. "I think that is really critically important because you're not alone."

Even if you aren't a victim or family member, it’s hard not to be impacted by the images. That’s why experts say it’s important to recognize both when you’re desensitized to the violence around the country and when it becomes too much.

"It's important to not be numb and recognize how bad this is and call for action and help each other through it," Dr. Gold said. "But at the same time, if you focus on it too much, it's really heartbreaking and really hopeless at times. I think that people kind of struggle with how much they should be focusing on it, and I would just say, you know, pay attention when you're reading social media about how you're feeling, if you’re grinding your teeth. If you're getting more angry, if you're feeling more sad, take a break. It's okay."

While healing may begin with community embrace, there’s still a long road ahead for families and a nation divided over a solution.

Mental experts say if you are directly impacted by the recent events, one good resource would be the Disaster Distress Hotline. It’s available 24/7, in English and Spanish to call or text.