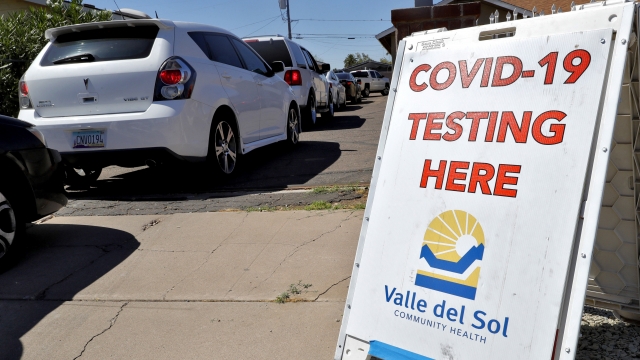 "You have the danger of having a gradual, insidious increase in community spread, which will be much more difficult to contain as the community spread amplifies itself," Dr. Anthony Fauci, NIAID director at the National Institutes of Health, testified to Congress.

Doctors warn as opening up continues, the median age of cases is skewing much younger, in some counties as young as 29.

"They were always infected. They were just not recognized. And as our capacity to test more and more people expands, we're going to be able to have a greater capacity to test younger and younger individuals. In the beginning, we weren't testing anybody under the age of 60. So that's kind of an illusion of the numbers because of how we're being able to test more and more people," Dr. Frank Esper, infectious disease specialist at Cleveland Clinic, said.

"What you can't forget is that if you get infected and spread the infection, even though you do not get sick, you are part of the process of the dynamics of an outbreak. And what you might be propagating inadvertently, perhaps innocently, is infecting someone who then infects someone who then is someone who is vulnerable. That could be your grandmother, your grandfather, your sick uncle whom winds up dying," Fauci said.

While states like New York and New Jersey, initially hit the hardest by the outbreak, are seeing new case numbers decline, some states are seeing the number of new coronavirus cases double.

"A point about pandemics that hasn't been made enough is that a pandemic is a disease that's spreading around, around the globe. It's new. It's hitting all areas, but it doesn't hit each area with the same severity at the same time,"Dr. Rich Besser, President and CEO of the Robert Wood Johnson Foundation and Former CDC Director told Newsy.

"In those states, you need to see different action, which you need to see. There is a dialing up of social distancing, not a dialing down. And there hasn't been enough discussion that these measures of social distancing and what we allow people to do and not allow are tools that you dial up and down you know, until we have a vaccine and better treatment,"Besser said.

Then there are hospitalizations, which are increasing at a lower rate, but still increasing nonetheless in some hot spots around the country.

Nine states have reported an increase in COVID-19 hospitalizations since Memorial Day. Data from Arizona’s Department of Health Services showed ICU bed use was up 9% overall in two weeks.

"Hospitalized patients usually lag a couple of weeks, at least, behind when there's a new index case within the community," said Dr. Joseph Forrester. He runs a large physician group that takes care of patients at four area hospitals in Denver.

He says that in states like Colorado or New York with declining new COVID-19 cases and hospitalizations, the disease could surge again as states open up and tourists come for summer vacation.

"We're going to see spotted increases based on how we open up and how many people are sort of asymptomatic or minimally symptomatic carriers and happened to go to different communities within the United States," Forrester said.

When asked if the availability of testing as it stands right now, is adequate, Forrester told Newsy: "In my opinion, that is a thing that has to be more available. I think testing is going to be critical until there's a vaccine."