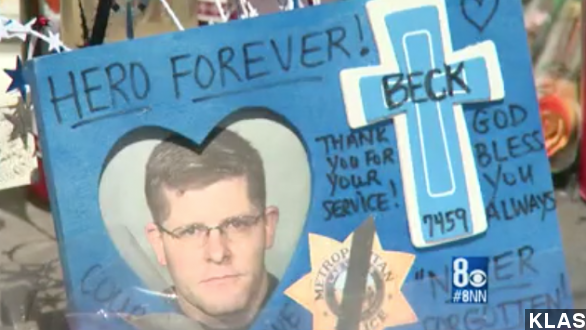 By Ben Lawson
June 15, 2014
Igor Soldo and Alyn Beck were attacked and killed in a Las Vegas rampage last week. At least 24 fundraisers have been held to support their families.
SHOW TRANSCRIPT

Communities across the country have rallied together to support the families of two Las Vegas Police officers who were shot and killed while eating lunch last week.

Officers Igor Soldo and Alyn Beck were eating at CiCi's Pizza when two people walked in and opened fire on the officers. The attackers would later kill Robert Wilcox at a nearby Walmart before their rampage came to an end. (Via KLAS)

There's been a huge outpouring of support for the families the men left behind. So many officers volunteered to escort Beck's body from Salt Lake City International Airport to his final resting place in Wyoming that some had to be turned away. (Via The Salt Lake Tribune)

KTNV reports that at least 23 other fundraisers have been organized for the family as well. Las Vegas businesses like car dealerships, tattoo parlors, movie theaters and many more all found ways to show their support to the victims.

Beck's sister said that even though this situation showed the worst in people, it showed the best as well.