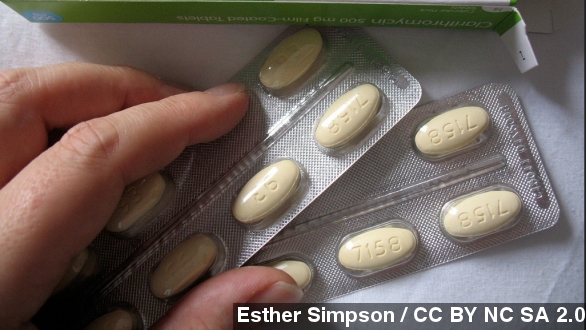 A common antibiotic used by millions worldwide could be linked to hundreds of deaths from heart problems every year.

Clarithromycin, which is used to treat things like pneumonia, bronchitis and sinus infections, was linked by Danish researchers to dozens more deaths per year than penicillin.

Their new study, published in the British Medical Journal, studied hundreds of cases where a patient died from heart problems while taking one of the two drugs, and found clarithromycin had a 76 percent higher risk than penicillin.

​Though the risk from either drug was small, the researchers said in a statement, "Clarithromycin is one of the more commonly used antibiotics in many countries and millions of people are prescribed this drug each year."

The researchers aren't urging doctors to stop prescribing the drug, though, citing the low risk and the need for more research. (Video via WLNE)

In an email to Medscape, one of the researchers said, "This finding should probably have limited, if any, effect on prescribing practice in individual patients (with the possible exception of patients who have strong risk factors)."

Instead, they're more worried about the industry-wide reliance on the drug. The Telegraph reports doctors in the U.K. prescribed the drug 2.2 million times last year.

As for the U.S., a writer for KCNC says American doctors are much less likely to prescribe the drug, saying, "In fact, clarithromycin isn’t even on the top ten list of prescribed antibiotics in America—we simply have better and more effective ones with fewer side effects."

But there are other related medications out there that have been linked to heart problems.

The FDA announced last March that azithromycin, which is similar, may lead to irregular heart rhythm that could potentially be fatal.

The Danish researchers urged more studies using different techniques to back up their findings.

This video contains an image from Esther Simpson / CC BY NC SA 2.0.