Commercial Supersonic Jets Could Come Back — If They Weren't So Loud 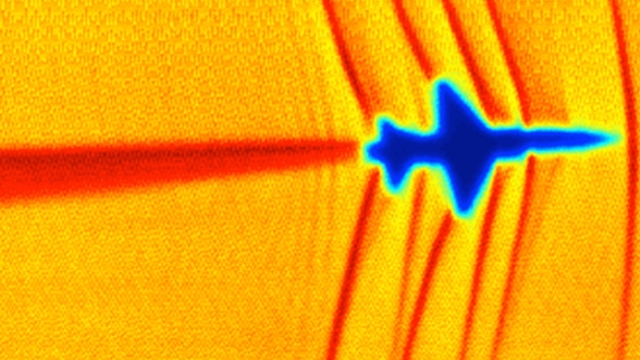 SMS
Commercial Supersonic Jets Could Come Back — If They Weren't So Loud
By Evan Thomas
By Evan Thomas
June 14, 2016
These types of planes are still banned because of the annoying shockwaves they create.
SHOW TRANSCRIPT

Supersonic flight is a solved problem. So why are we still relying on relatively slow commercial jets to get from A to B? Long story short: That noise is really annoying.

An aircraft traveling faster than the speed of sound compresses the air in front of it as if it were a fluid. If this happens close enough to the ground, the wave of sound and pressure the aircraft pushes out of the way — the sonic boom — is very noticeable.

You could hear it when the space shuttle made its landing approach.

The Concorde triggered sonic booms, too, and they were so disruptive they led to a federal ban on supersonic flight over land.

Despite the noise, there's not much risk of actual damage from sonic shockwaves.

According to NASA, immediate damage to structures doesn't start until about 2 pounds of overpressure, which is higher than any previous supersonic transports triggered. Eardrum damage doesn't occur until 720 pounds. But test data shows people will notice — and will complain about — as little as 1.5 pounds.

So NASA is trying to quiet the booms to more of a "thump." It's testing subjects to find out what boom characteristics are least annoying, and it's awarded a $20 million design contract for a low-boom supersonic test plane to Lockheed Martin.

The company has its work cut out for it. The FAA says it would need to see "thorough research" before it makes any changes to the ban on supersonic flight, and warns any rules will probably require that a supersonic transport be no more disruptive than existing subsonic planes.

But for air travelers, it could be worth the wait. Assuming Mach 2 cruise speeds, like those the Concorde achieved, a transport could fly from Los Angeles to New York in less than two hours. A flight from New York to London could take a little more than 2.5 hours.

Lockheed Martin's flight tests could start as early as 2020 — but then, if they go according to plan, you might not hear the progress at all.