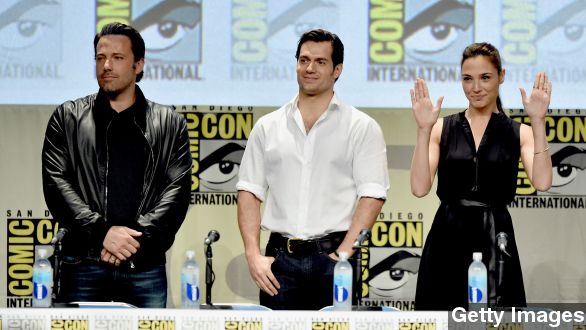 By Matt Picht
July 26, 2014
Warner Bros. showed off a 20-second teaser for the upcoming "Batman v Superman," as well as a first look at the film's portrayal of Wonder Woman.
SHOW TRANSCRIPT

We've still got at least two years to wait before "Batman v Superman: Dawn of Justice" hits the big screen, but DC fans were still counting on Warner Bros. to bring something from the film to this year's San Diego Comic-Con. And the company did not disappoint.

The film's director Zach Snyder made an unsurprising surprise appearance at the Warner Bros. panel in Hall H Saturday, and he brought along a few friends: Henry Cavill, a.k.a. Superman, Ben Affleck — that's the new Batman — and Gal Gadot who will be playing Wonder Woman. (Via Getty Images)

The Big Three didn't stick around long enough to take any questions or make any remarks about the film, but panel moderator Chris Hardwick did manage to snap this selfie with the power trio before they got away.

Snyder also brought something else exciting to the show: the first footage from "Batman v Superman." Which we don't have. Nobody has it. It's not out there. We checked.

Warner Bros. is being somewhat tight-fisted with the teaser, and all the audience has leaked so far is a handful of grainy screenshots. Very disappointing. (Via Twitter / @321_js,RyanHigginsRyan)

Without actual footage to show, some outlets covered the big reveal with more ... creative means.

"Gotham city at night. Pouring rain. Thunder and lightning and war-like drum music. ... Then the sky reveals Superman floating in the Bat-Signal, what?!" (Via IGN)

The twenty seconds of footage have received several dramatic retellings online. The teaser apparently featured a dramatic staredown between the Superman and Batman. Some important takeaways: Batman looked to be wearing an armored suit, and both of the heroes apparently had glowing eyes. (Via /Film, Buzzfeed, ScreenCrush)

But Warner Bros. final Comic-Con gift to superhero fans was a bit more substantial: the world's first look at Snyder's take on Wonder Woman, who has a cameo role in the upcoming movie.

Wonder Woman is the last of the film's heroes to be unveiled, and a writer for Cinema Blend quips the cast of the movie's looking a little under-saturated. "At this rate, The Flash will look like a handful of martian dirt."

A Forbes writer notes this will be Wonder Woman's cinematic debut, and consequently her role could make or break the film. "If Gal Gadot as Wonder Woman isn't used well or doesn't come off well, Zack Snyder will be forever known as the guy who screwed up Wonder Woman and that will be the film's enduring legacy."

"Batman v Superman" kind of overwhelmed the Warner Bros. panel, but the company did also show off footage from the upcoming films Jupiter Ascending and Mad Max, as well as their final Tolkien-based movie "The Hobbit: The Battle of the Five Armies."