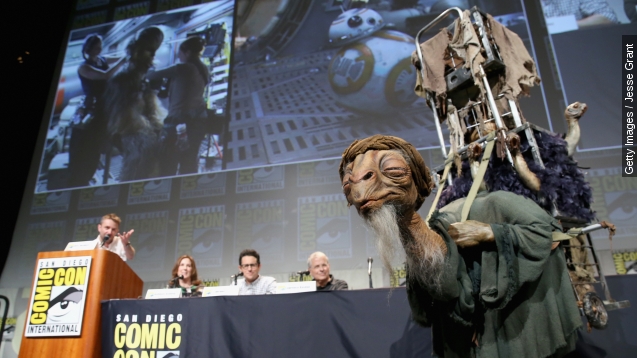 There's a certain inevitability at every Comic-Con. Everyone's going to wear a costume. Yes, everyone.

And someone's going to steal the show.

Oh, sure. Everyone gets some press. Especially when you release a terrifying trailer like AMC's preview of the next season of "The Walking Dead."

"We have to fight it because if we don't, we die," character Jessie Anderson says.

But at Comic-Con 2015, most of the press attention is going to two popular brands for two very different reasons.

First, you have the show that left a lot of unanswered questions less than a month ago, the biggest of which ... is Jon Snow really dead? While the "Fire and Ice" book series never definitively says Snow is dead, that's a lot of stab wounds and a lot of blood. (Video via HBO / "Game of Thrones")

Apparently to goad the cast into a reveal, a man in the audience asked what it would be like not to work with actor Kit Harington and they laughed nervously and didn't really answer the question.

That is until director David Nutter told the room about his recent conversation with President Obama.

"He shook my hand, he looked at me and put his hand here on my shoulder and said, 'You didn't kill Jon Snow, did you?'" Nutter said. "I didn't know if I'd be sent off to Guantanamo or what the answer would be, but I said, 'Mr. President, Jon Snow is deader than dead.'" (Video via Flicks and the City)

The other great reveal of the day was the show's audition reel.

"All my life, men like you have sneered at me," said Gwendoline Christie's character, Brienne of Tarth. "And all my life, I've been knocking men like you into the dust."

But as the polar opposite to coy answers, the true winner of the convention in the early going went big and came from a galaxy far, far away.

Not only did J.J. Abrams allow several small teases on Star Wars 7, but he also released a behind-the-scenes trailer instead of a traditional one.

It wasn't just a flip of the script — the trailer seemingly aimed at reassuring its rabid fanbase that the new movie wouldn't be entirely CG-dependent, but hearken back to the '70s and '80s films that relied heavily on real-life cinematography.

"To see the way the technology has evolved and yet keeping one foot in the pre-digital world," actor Mark Hamill said.

As if that weren't enough, Abrams later announced it was time to leave and marched 6,000 spectators half a mile from the convention site to a concert.

Composer John Williams is still working on the new score, but the crowd — heavily armed with phones — didn't seem to mind spending the night listening to old favorites. (Video via YouTube / Emese Gaal)

This video includes images from Getty Images and music from Podington Bear / CC By NC 3.0.