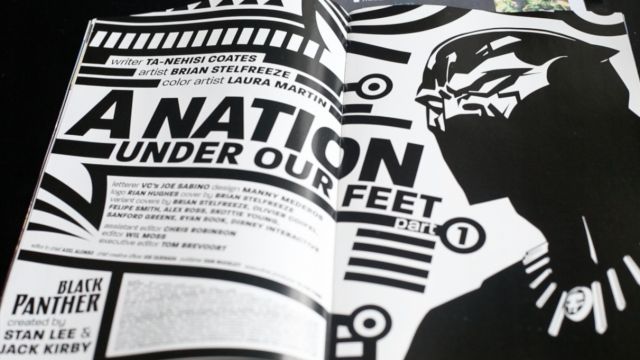 SMS
Comic Books, Like Everything Else, Benefit From Diversity
By Jamal Andress
By Jamal Andress
April 11, 2016
Despite the diverse crowd of comic book fans, for a long time, the characters themselves haven't reflected the readers. That's slowly changing.
SHOW TRANSCRIPT

"We're definitely seeing people coming in who didn't read comics saying, 'I wasn't that interested; it was a bunch of strong white guys punching each other in the head, right?' ... ya know, it's cheesy, but everybody should get to see a hero who looks like them, and now, that's really happening," Hopkins said.

"Black Panther No. 1," written by award-winning journalist and author Ta-Nehisi Coates, is one of the most anticipated comics to hit shelves in years, selling more than 300,000 copies in presales alone.

"People are so excited, I've not gotten this many calls for a book. ... I've been having people come in since like January," said Sam Hopkins, the manager of First Aid Comics.

But more importantly, this comic book release is part of a new trend in the various comic book worlds to appeal to a more diverse audience. Back in October, Marvel released 50 variant comic book covers based on iconic hip-hop albums.

Also, over the past year, characters like a Pakistani Ms. Marvel and an Afro-Latino Spiderman have stirred up the comic book world.

And of course, Chadwick Boseman is set to hit the silver screen as Black Panther this summer in "Captain America: Civil War" and in his own standalone film in 2018. All of this shows an effort to appeal to the masses — an effort that just didn't exist in years past.

"People of color have been reading comics for a long time, and they've been ignored, and I think that market has ... you need to market to it, and you need to sell to it," First Aid Comics owner James Nurss said.

"I think the business side of Marvel is figuring out it's just a growing market. ... Another good example is Ms. Marvel, it's a whole new audience they're going after, and it's totally nontraditional comic readers buying it," Nurss said.

No matter Marvel's motivation, everyone here at this South Side Chicago shop appreciates the new look of the old heroes.

"I had to make sure I come in here and get a few issues for not only myself, but for my nieces and nephews," First Aid Comics customer Damon McGee said.

"I can't tell you how many parents come in here and they're like, well, they want a black child, not my Captain America, who I like. Ya know?" Nurss said.