Comic Books Have A History Of Social, Political Commentary 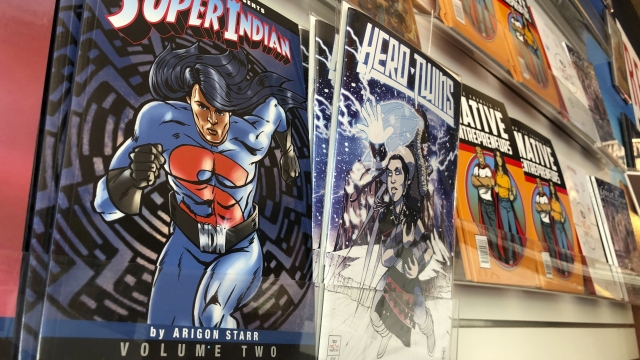 SMS
Comic Books Have A History Of Social, Political Commentary
By Newsy Staff
By Newsy Staff
February 21, 2022
Graphic novels have been the target for some book bans across the country, and some point to the works' political commentary as the reason.

Movie adaptations of comic books — from the Marvel Cinematic Universe to constant reboots of "Batman" and "Superman" — dominate at the box office.

If you're a fan, you probably go see those movies or read the original comics as an escape from the world, from politics and from some of the more contentious debates over social issues.

But when you look a little closer, comic books and graphic novels have historically been action-packed with deep political and social commentary, and that might be why they've been caught up in recent debates over what schoolchildren can and can’t read.

In Texas, a legislator who proposed banning over 800 books from school libraries included a graphic novel version of Shirley Jackson's short story "The Lottery" on the ban list.

Parents and legislators cite a range of reasons for proposing the bans in the state or local school districts, but books like "The Lottery" and the graphic novel version of the books "The Handmaid's Tale" and "Speak," which is about a high school student's sexual assault, delve into societal issues like gender and tradition.

And in Tennessee, the McMinn County school board voted to remove "Maus" from the 8th grade curriculum.

They raised issues over some language and nudity, but the work is a deep allegory about the Holocaust and has been used in curriculum across the country to teach Holocaust history.

Christina Knopf is a professor at the State University of New York at Cortland whose work analyzes what pop culture says about history and politics. She says graphic novels can be targeted for bans more often because of a common misconception.

"I often encounter a lot of people who are like 'Comics? Those are kids' books.' Well, not really. If you read them, they're not. And I think that conception is part of why, whether it's 'Maus' or anything else, gets a much stronger reaction. "

Now, you may not have heard of a graphic novel like "Maus" before. But it has more in common with iconic superhero comics than just paneled illustrations. As die-hard fans know, comics, including comics read by kids worldwide for decades, have a long history of deep political and social commentary.

Superman has waded into political issues several times throughout the years. Some of the earliest issues of the comics feature him fighting against powerful interests in the community, including slum landlords and corrupt orphanage administrators.

Your friendly neighborhood Spider-Man has long been a working-class hero, with Peter Parker often bouncing between jobs as a delivery man and part-time photographer while hanging on at the margins of society when he's not rocking the Spider-Man suit.

Captain America was created by two Jewish artists in the lead-up to the U.S. entry into World War II, at a time when U.S. opposition to Nazi Germany wasn't a sure thing. Antisemitism and Nazism had considerable support in the U.S.

The first issue of the "Captain America" series, published in March of 1941, made a clear political statement, showing Cap punching Adolf Hitler. Co-creator Joe Simon said he was physically threatened after the issue was published.

Captain America jumped right into the political debate, and as Anthony Lioi, a professor at the Juilliard School studying the relationship between American literature and other forms of media, points out, it even left its mark on more recent films.

"There's this very vibrant memory, right, particularly among comics creators, but also among comics readers, right of the overtly political nature of Captain America," Lioi said. "And of course, that continues into movies like 'Captain America: The Winter Soldier,' which is about, you know, obviously the discovery that the American security state has been infiltrated by fascists."

The character has also been used as a way of tackling issues of race and identity. In 2003, Marvel released a comic series about a Black Captain America, Isaiah Bradley, who was experimented on in ways that paralleled the Tuskegee Syphilis Study that infected Black Americans with the disease.

The recent Marvel TV series "The Falcon and the Winter Soldier" also deals head on with questions about race. Anthony Mackie, the actor who plays Falcon, has said the character reflects on the burden of using Captain America’'s shield and grappling with "whether a Black man can represent a country that doesn't represent him."

All the while, one of the largest comic book producers has been trying to get out of politics.

In 2019, the author of "Maus," Art Spiegelman, said Marvel brought him in to write an introduction to a compilation book it was releasing. He said Marvel rejected his introduction because the company was trying to remain apolitical. Spiegelman had compared then-President Donald Trump to Captain America's openly fascist villain Red Skull.

And considering the long political history of comics and graphic novels, Marvel's effort to keep political issues out of comics might have been an outlier.

Even if partisan politics are out of bounds in some cases, there's still room for political and social commentary in comics and their adaptations.

The X-Men came out in 1963, the same year that police violently responded to protests in Birmingham, Alabama, and the same year Dr. Martin Luther King Jr. led the March on Washington.

In a time before heroes of color were widespread, X-Men's mutants were created with metaphors about discrimination against minority groups in mind and has also addressed issues of LGBTQ discrimination.

Beyond the most popular comics, graphic novels have offered commentary on social and political issues like immigration.

Widely acclaimed works like "The Arrival" by Shaun Tan, the book and film versions of "Persepolis" by Marjane Satrapi and "American Born Chinese" by Gene Luen Yang, now set to be turned into a series for Disney+, all capture social and political dynamics in graphic novel form.

All three have also won numerous awards, not just in comics categories, but for their success as works of literature.